Volatile Dragon can be tamed 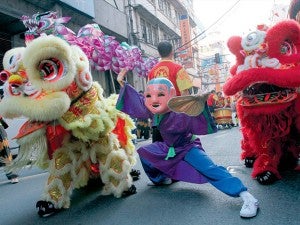 DANCE OF THE DRAGON The traditional dragon and lion dance is performed on the eve of the Year of the Water Dragon in Manila’s Chinatown. NIÑO JESUS ORBETA

Among the many predictions geomancers dish out to usher in the Chinese Lunar New Year, there is one everybody seems to agree on—the Year of the Dragon will be volatile for business and for the economy in general.

One such person is Binondo-based feng shui practitioner Maxima “Maxie” Tiu, who believes 2012 will be a trying time for wealth creation and wealth preservation, notwithstanding the traditional belief that the dragon year is the most auspicious among the 12 signs of the oriental zodiac.

“This is the Year of the Water Dragon, and the dragon breathes fire,” she told the Philippine Daily Inquirer, explaining that the effects of both elements run counter to each other, thus creating tension and disrupting the harmonious flow of energies in the environment.

Tiu—whose shop along Ongpin Street in Manila has attracted feng shui adherents on the lookout for lucky charms—pointed out that many of her clients have come to her looking for items that will help bring prosperity by calming the temperamental dragon that rules this year.

“It might be a difficult year for business, but there are things you can do to help make things right for you,” she said. “It all depends on how you respond to the situation.”

In a similar manner, practitioners in the more empirical field of economics predict a volatile year for the economy of the Philippines and the rest of the world—a rare confluence of forecasts between the Eastern and Western philosophies.

According to Bangko Sentral ng Pilipinas Governor Amando Tetangco Jr., the Philippines in 2012 faces a triple threat from the lingering weakness in the economy of the United States, which is the Philippines’ largest trading partner; the prolonged debt crisis in Europe; and the threat of a so-called hard landing in China, the world’s second largest economy and a major buyer of Philippine electronics and raw materials.

Indeed, because of these uncertainties, the government has cut its economic growth forecast for this year to 5 to 6 percent from an earlier target of 5.5 to 6.5 percent.

The reduction was also partly due to the anemic growth of the gross domestic product in the first three quarters of 2011, which observers attribute to the Aquino administration’s massive spending shortfall.

Economists now predict that last year’s growth will struggle to meet even the lower end of the revised 4-5 percent growth target, making the Philippines the underperformer among its peers in the Association of Southeast Asian Nations (Asean) region.

To help things along, the BSP has kept borrowing rates at record lows since the 2008 global financial crisis, and even cut them further last week to prod banks to lend (and thus, stimulate economic growth).

But banks—their vaults flooded with cheap money—seem to be frustrated by the dearth of projects where these funds could be put to more productive use.

“The banks are ready to lend,” said Aurelio Montinola III, president of the Bankers Association of the Philippines, noting that the best way to insulate the country from the expected economic volatility from abroad in 2012 is for the government to move proactively.

“It’s the same as what everybody says: [invest more in] infrastructure and power, whichever way you do it,” he said. “You will have some problems from Europe, but you can offset it with more government stimulus.”

Montinola, who also heads Bank of the Philippine Islands, the country’s third largest lender, welcomed the pronouncements made by the administration’s economic managers about ramping up government spending this year. But he aired a note of caution: “It’s one thing to announce the numbers and it’s another thing for the people to see that the projects are moving.”

ING Investment Management CEO Paul Joseph Garcia urged the government to help shield the country from the expected global volatility this year by focusing more on the economy at home.

“They have to improve the capital stock of the country by boosting investments in infrastructure,” he said. “They should pave the way for the full implementation of PPP (public-private partnership) which—on paper—is a very good program. But as we’re seeing, there are delays and execution issues.”

Garcia noted that last year, the local economy’s growth was attributable almost entirely to the activities of the private sector, as the government clamped down on spending in an effort to cleanse the system of deeply rooted corruption.

It is, of course, impossible for any economy to protect itself fully from external developments, given the interconnected nature of global trade, but Garcia said the risks could be mitigated through appropriate government response—a principle that feng shui adherent Tiu subscribes to.

“Feng shui is a guide,” Tiu said, raising her voice above the growing din of customers crowding her store for lucky bracelets, wind chimes and coin charms on the eve of the Lunar New Year. “If you think it’s going to be a bad year, you have to invest in something that will offset the bad ‘chi.’ You hang things on the doorway or on the window to counter the effects of bad energy.”

“In feng shui or in business, nothing is absolute,” Tiu said. “Your response to the environment is what will make a difference.”

Wise words, whether you subscribe to the principles of geomancy or economics. With a report from Jeannette I. Andrade

Hand signal? We could have just met with Sotto sans Lacson, says Robredo