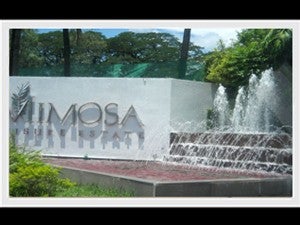 MORE ATTRACTIVE. An upgraded North Luzon Expressway has made the Mimosa leisure estate, which the government is selling, more appealing to private investors. (mimosagolf-countryclub.com)

The Aquino administration is set to hand the 215-hectare Mimosa leisure estate back to the private sector through a public bidding sometime in August.

The sale of the sprawling property in Clark, Pampanga, is part of the government’s overall strategy to attract private investment and boost tourism in the area.

Already, the term of reference (TOR) for the bidding is now being finalized and will be made public no later than July, Bases Conversion Development Authority president Arnel Casanova told the Inquirer.

Mimosa is being run by the state-controlled Clark Development Corp (CDC). In 1998, CDC regained control of the property from Mondragon Leisure & Resorts Corp., which failed to pay its rental obligations to the government.

CDC, which maintains the Clark Freeport Zone as a premier investment and business center, is a subsidiary of the BCDA.

“It’s a good time to privatize Mimosa as confidence level is high and the new board and management of CDC are more transparent,” Casanova said in an interview.

The government had tried to auction off the Mimosa concession many times in the past.

But Casanova said public bidding would still be the preferred route over a negotiated sale.

“Hopefully, this could be done by August,” he said.

By attracting private investors to continue the development of the Mimosa estate, the government hopes to generate business opportunities, jobs and economic activities.

The Mimosa property is also expected to become more attractive to new investors after the North Luzon Expressway has been upgraded.

The leisure estate has a recreational, hotel and residential complex, a 36-hole all-weather golf course designed by the Honolulu-based team of Nelson, Wright and Haworth, and a casino.

The estate is part of the 4,400-hectare former US military facility in Clark.

The BCDA has the mandate to convert former US and Philippine military bases into productive civilian economic centers.

The fresh attempt to privatize Mimosa will be complemented by the government’s ongoing plans to upgrade the budget terminal at the Diosdado Macapagal International Airport (DMIA) in Clark by likewise taking in a private partner this year.

Casanova assured the public that all privatization projects to be undertaken by the BCDA under the Aquino administration would be done in a “fair and square” and “transparent” manner.

“Sometimes, there are accusations that the TOR [term of reference] is custom fit for certain players. It shouldn’t be that way. The bidding must attract more players who are competent and financially capable,” he explained.