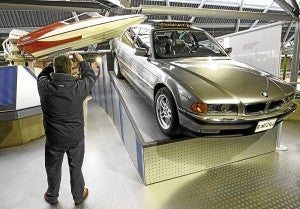 A VISITOR photographs the Glastron GT-150 Jump Boat with the BMW 750iL at the press preview of the Bond in Motion exhibition at the Beaulieu National Motor Museum. AFP

This week, Eon Productions and Beaulieu will feature 50 cars used in various James Bond movies to celebrate the world’s most famous spy movie franchise’s five decades in motion picture. Dubbed as “Bond in Motion,” the exhibit will run from January to December at the National Motor Museum in Hampshire, England.

Considered the largest collection and exhibition of its kind staged in its history, 50 of Bond’s most iconic vehicles will be showcased, which also marks the museum’s 40th anniversary as well as 60 years since Beaulieu opened as a visitor attraction. Eon Productions is the producer of the James Bond movie franchise.

Among the celebrity cars on display include the 2008 Aston Martin DBS from the movie “Quantum of Solace,” the 2002 Jaguar XKR with its special effects weapons from “Die Another Day” and the infamous 1937 Phantom III Rolls-Royce from Goldfinger. Beaulieu’s commercial director, Stephen Munn, said “following the success of the first Bond cars exhibition staged at Beaulieu in 2001, we are delighted to be working with EON again on this new display, bringing together the world’s largest collection of Bond vehicles.” Aside from the cars, there will be some other gadgets, boats, motorbikes, jets and sleds that were used in the movies on display. 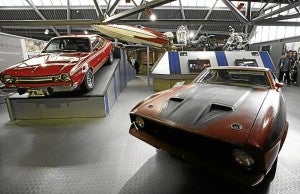 A FORD Mustang Mach 1 (right), which was featured in the James Bond movie “Diamonds Are Forever,” is seen next to the AMC Hornet used in the movie “The Man with the Golden Gun.” AP

Beaulieu’s National Motor Museum was originally called the Montagu Motor Museum and is a part of Beaulieu Village, located at the heart of New Forest and English county of Hampshire. The museum was founded in 1952 by Edward Douglas Scott Montagu, the third Baron Montagu of Beaulieu, as a tribute to his father, who was considered to be one of the pioneers of British motoring and is the first person to drive a motor car into the yard of the Houses of Parliament. He was also credited to have introduced motoring to King Edward VII, who was then the Prince of Wales in the 1890s.

Initially, the museum only housed five cars and a small collection of motoring memorabilia and as the popularity of the Beaulieu collection grew, annual attendance figures reached almost 300,000 visitors by 1959 and by 1964, annual attendance exceeded half a million that prompted to make a purpose-built museum to house the increasing size of the exhibition. By 1972, the museum had about 300 vehicles and the new building was inaugurated and was renamed National Motor Museum. The opening of the museum coincided with the launch of the Jaguar XJ12. Run by the National Motor Museum Trust Ltd., the museum has a monorail that runs inside the building and houses some of UK’s most prized historical vehicles, including four land speed record holders, and its library has one of the finest collection of motoring books, journals and photographs. Aside from the monorail, it also features a rally car simulator and a go-kart rink.

In another footnote, the local HBO channel aired re-runs of all James Bond movies every evening last month and the latest James Bond actor, Daniel Craig, was also spotted on the streets of Malate visiting his wife, Rachel Weiss, who was here filming for another action movie, “The Bourne Legacy.”