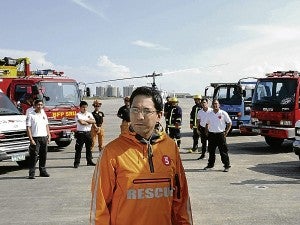 PAOLO Bediones leads the men and women of Rescue5

When a media person sees someone in distress, what should he do? Just write an article, shoot a photo or video, or actually do something about the situation?

For the people behind TV5’s News5, the answer is clear: Something has to be done, particularly in situations where lives are at stake. Thus, Rescue5 was born.

According to Luchi Cruz-Valdes, head of news and information at TV5, the network wanted to live up to its catchphrase: Higit sa balita—aksyon (Beyond just news—action).

She relates that the idea to have a team properly equipped to conduct various types of rescue and relief operations was mainly inspired by the aftermath of Typhoon Ondoy in 2009, when thousands were left dead and rendered homeless. 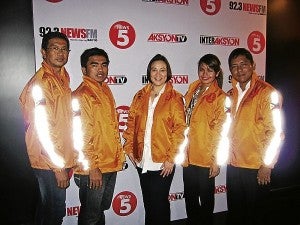 When News5 reporters covered the event, she says they could not do anything besides keep the camera rolling to capture the damage to lives and properties that Typhoon Ondoy left in its wake. While the victims grieved and mourned, News5’s news crews were unable to provide any real help.

“We had to think of a way to deliver real help,” she says. “We really wanted to help, so we asked the reporters who wanted to learn (proper rescue procedures and techniques).”

News5 anchor and Rescue5 team leader Paolo Bediones says he had to reacquaint himself with the first aid and rescue procedures that he had previously learned as a Philippine Red Cross volunteer.

Those who wanted to participate in rescue and relief efforts also had to go through a series of rigorous training in various disciplines, aside from the requisite basic first aid procedures.

This training, as those on the Rescue5 team eventually learned, was no walk in the park.

According to Cruz-Valdes, when the Rescue5 program was first announced, almost everyone signed up. After having a taste of the training for swift water rescue, many dropped out.

Those who chose to stay and eventually completed the training sessions, however, got a sense of fulfillment and pride from being part of the team. Bediones says the Rescue5 uniform—the shirt, jacket, and wetsuit—was like a badge of honor for the wearer.

TATAY Dionisio gets carried to safety

Cruz-Valdes says the main objective of Rescue5 was not to capture dramatic videos that could be used for newscasts. What News5 really wanted to do was harness the power of the media to help those in need.

“Media is the government that (the people) can count on to help them. The government should be doing these things, but they’re somehow unable to. We’re using our power to help people,” she says, adding that people reacted positively to Rescue5 after the first few times the team went out on rescue and relief missions. “We didn’t just distribute relief goods. We were really there to rescue them.”

Bediones relates that the Rescue5 team, at the height of Typhoon Pedring, went to affected areas with rubber boats, complete rescue equipment, and even a crew cab that could go under 4.5 feet of water.

ATTENDING to the needs of the sick

“We rescued people on the roofs of houses. There was even a man who desperately needed to undergo dialysis and whose stomach had already swollen. We rescued him, too. Those are our little stories,” Cruz-Valdes relates.

Rescuers for all seasons

Aside from the usual rescue operations conducted during times of natural disasters, the Rescue5 team also responds to everyday emergencies.

Calls to the Rescue5 hotline, Bediones relates, ranged from simple stomachaches and other medical emergencies to road accidents.

While members of the Rescue5 team were trained in first aid and various kinds of rescue procedures, TV5 head of public service for news and information Sherryl Yao says those manning the hotline were also specially trained to handle calls for help and to differentiate real calls from prank calls.

“The calls are handled by (emergency medical technicians). We also have a callback mechanism to validate calls,” she says.

These EMTs could also report in front of the camera and on the radio.

“When the EMTs are reporting, there’s a certain confidence that they know what they’re doing. They have a lot of training and experience. In spending time with them, we also learn from them,” Bediones says.

TATAY Dionisio will finally get his dialysis

More in the future

Launched in February 2011, this barely one-year-old program is expected to continue to grow in the future, given the support of TV5 president Ray Espinosa and TV5 chair Manuel V. Pangilinan.

According to a source, the TV5 management has invested at least P12 million for equipment and training, with this amount expected to increase even more in the coming months.

BEDIONES rescues a baby in a flood-stricken area

“We’re seeing it grow and evolve. It’s meant for something bigger and better. MVP sank a huge investment in this program. (Our bosses) are very supportive,” Bediones says.

“(Our rescues) don’t stop when the camera stops rolling. We rescue even without cameras rolling. We deliver the news for public service towards practical change. It’s good that our bosses share our vision,” he adds.