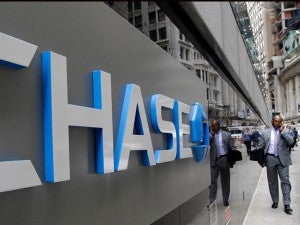 This Oct. 12, 2011 file photo shows the J.P. Morgan Chase logo at the base of one of the bank's larger Lower Manhattan buildings in New York. JPMorgan Chase said Friday, Jan. 13, 2012, its income fell 23 percent in the fourth quarter of 2011 after the bank set aside a large sum for litigation reserves and its investment banking income declined. (AP Photo/Kathy Willens, File)

NEW YORK — The U.S. economy may be healing, but banks are suffering from a housing hangover.

JPMorgan Chase spent $3.2 billion last year to fight lawsuits, almost all of them over poorly written mortgages. That was down from $5.7 billion in 2010, but it made clear that housing still haunts the bank, five years after the bubble burst.

The bank said Friday that it set aside $528 million in the last three months of 2011 to fight lawsuits. It also spent $925 million in the fourth quarter to carry out foreclosures and handle mortgage defaults.

The expenses took a bite out of JPMorgan’s quarterly profit, which fell 23 percent from a year earlier, to $3.7 billion, and missed Wall Street expectations. Stocks across the banking industry declined as a result.

JPMorgan also took a hit because of choppy financial markets. It collected $1.1 billion in investment banking fees, down 39 percent from the year before. Its fees for underwriting debt fell 40 percent, and 65 percent for underwriting stock.

The struggles came while the economy and the job market were showing signs of a real recovery. JPMorgan said the household finances of its customers were stabilizing, and more people paid credit card bills on time.

The customer improvements allowed the bank to book a profit of $730 million by reducing the reserves it had set aside for credit card defaults.

JPMorgan stock fell 3.4 percent to $35.60 in early afternoon trading. Its competitors followed: Citigroup was down 3 percent and Bank of America 2.5 percent. Wells Fargo, which relies less on investment banking, was down 0.3 percent.

Stock market traders take their cue from the results of large banks like JPMorgan, which has 50 million customers. The results demonstrated that it remains unclear how long the mortgage problem will be a drag on the industry.

During the housing bubble last decade, the banks gave out mortgage loans without checking for documents that proved the borrowers had jobs, or could even pay their monthly bills.

The boom in so-called subprime lending was one of the causes of the financial crisis that erupted in the fall of 2008.

JPMorgan and other banks are being forced to buy back many of the soured loans that they sold to Fannie Mae and Freddie Mac, the government lenders, during the boom. In the last quarter, JPMorgan lost $390 million from the buybacks.

The bank’s higher litigation expense does not bode well for Bank of America, which has been damaged far more than JPMorgan from lawsuits related to mortgages. Last year, Bank of America agreed to pay close to $13 billion to settle mortgage issues.

Among other highlights from JPMorgan’s fourth quarter results:

— Corporate customers took out $110 billion in loans, 12 percent more than a year earlier. That suggests businesses are feeling more confident that demand for their products is picking up. The loans could be used to build factories, expand plants and open warehouses. Often that translates to job creation.

— In a closely watched and politically charged gauge, the bank set aside $1.2 billion, 36 percent less than the year before, to pay its investment bankers.

— The bank took a loss of $567 million from an accounting rule that applies to the value of its own corporate debt that it sells to investors. The value of that debt rose in the fourth quarter, but because the bank would theoretically have to pay more to buy it back on the open market, the bank takes a loss.

JPMorgan and the other big banks submitted this week to their annual Federal Reserve stress tests. The bank has asked for approval to raise its dividend for shareholders again.

Last year, the bank increased its quarterly dividend to 25 cents a share from 5 cents. Dimon told reporters that investors can expect a similar increase this year if regulators grant approval.