WASHINGTON — Four painful years after the Great Recession struck and wiped out 8.7 million jobs, the United States may finally be in an elusive pattern known as the virtuous cycle — an escalating loop of robust job growth, healthier spending and higher demand. 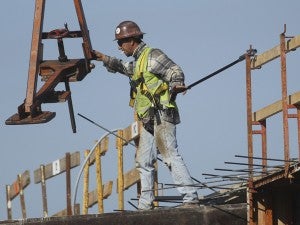 A construction worker directs a steel hoist at the foundation of a new condo complex in Sunrise, Fla., Thursday, Jan. 5, 2012. A burst of hiring in December pushed the unemployment rate to its lowest level in nearly three years, giving the economy a boost at the end of 2011. J PAT CARTER/AP PHOTO

The nation added 200,000 jobs in December in a burst of hiring that drove the unemployment rate down two ticks to 8.5 percent, its lowest in almost three years, and led economists to conclude that the improvement in the job market might just last.

“There is more horsepower to this economy than most believe,” said Sung Won Sohn, an economics professor at California State University, Channel Islands. “The stars are aligned right for a meaningful economic recovery.”

It was the sixth month in a row that the economy added at least 100,000 jobs, the longest streak since 2006. The economy added jobs every month last year, the first time that has happened since 2005.

And the unemployment rate, which peaked at 10.1 percent in October 2009 and stood at 9.1 percent at the start of last year, has fallen four months straight.

If economics textbooks and the best hopes of millions of unemployed Americans are confirmed, the virtuous cycle may be under way, which would suggest the job market will get stronger yet.

When more Americans are hired, they have more money to spend. When more money courses through the economy, businesses can justify hiring more people. That means more jobs, more spending and more demand for businesses. Which leads to still more hiring, spending and demand.

That would be the reverse of the vicious cycle that took hold during the Great Recession. People lost jobs and spent less money, so businesses rang up less sales and were forced to lay off more people. That led to even less spending and more layoffs.

“The labor market is healing,” said Diane Swonk, chief economist at Mesirow Financial. She cautioned that “we still have a long way to go — years — to recoup the losses we have endured.”

But it will take 6 million more jobs to get the United States back to what it had in December 2007, when the recession began. Economists forecast the nation will add almost 2 million this year.

The unemployment report was the first to be released since Republicans across the country began voting to determine a candidate to face President Barack Obama this fall in an election that will turn on the economy.

Obama appears bound to face voters with the highest unemployment rate of any president running for re-election since World War II. Unemployment was 7.8 percent when Obama took office.

But the president’s re-election chances may hinge more on the direction of the unemployment rate than on what the rate is come Election Day. The rate was 7.2 percent when Ronald Reagan beat Walter Mondale in 1984, but it had fallen from 10.8 percent two years before the election.

Obama, visiting the new Consumer Financial Protection Bureau, said: “We have made real progress. Now is not the time to stop.” He called on Congress to extend a tax Social Security payroll tax cut that is due to expire at the end of next month.

Campaigning in New Hampshire for Obama’s job, former Pennsylvania Sen. Rick Santorum claimed credit for Republicans, suggesting the gains were tied to voter optimism that a Republican would take the White House.

“There’s a lot of concern still,” added Santorum, who finished in a virtual tie with Mitt Romney in the Iowa caucuses earlier this week. Another candidate, former House Speaker Newt Gingrich, dismissed the job gains as inadequate.

The report painted a picture of a broadly improving job market. Average hourly pay rose by 4 cents. The average workweek lengthened by six minutes, a sign that business is picking up and companies may soon need to hire.

The private sector added 212,000 jobs in December. That gain was offset by 12,000 layoffs by governments.

In manufacturing, the 225,000 jobs added for the year are the most since 1997, and are particularly good signs for the economy. Factory jobs tend to pay well, and plant expansions signal that businesses are gaining confidence about the future.

LL Bean is adding 125 workers at its plant in Maine to keep up with demand for its popular duck boot. In North Carolina, Baldor Electric is expanding a plant that makes wind-powered motors, adding 166 jobs outside Gastonia. And Chrysler, bouncing back from bankruptcy, just announced that it is hiring 1,250 at two Detroit factories.

Meanwhile, oil and gas companies, are struggling to find engineers willing to relocate to rural areas where most of the drilling is done, said Jack Downing, managing partner for the recruiting firm MRINetwork WorldBridge Partners in Chicago.

Telecommunications and finance companies are restoring the jobs they eliminated at the depths of the Great Recession. And human resources employees, among the first jobs slashed when the economy collapsed, are in demand.

William Dunkelberg, chief economist at the National Federation of Independent Business, said hiring is strongest in the West and Rocky Mountain states, partly because high energy prices have helped the oil and gas industry. But job creation is still “dismal” east of the Mississippi River.

Economists cautioned that some of the month’s gains reflected temporary hiring for the holiday season. The government adjusts the figures to try to account for that seasonal factor, but doesn’t always get it exactly right.

The gains in transportation and warehousing, for example, reflected a strong increase in hiring for couriers and messengers. That could be because of the jump in online shopping over the holidays, the Labor Department said.

And the economy still faces many challenges, including a likely recession in Europe exacerbated by the debt crisis there. That could drag on the U.S. stock market, making U.S. investors feel poorer and weighing on their spending.

In a reminder of the threat, U.S. stocks, which had appeared poised for a higher open, declined for the day. The Dow Jones industrial average dropped 55 points. Analysts blamed a spike in borrowing costs for Italy, an ominous sign for the debt crisis.

“While December’s data represent good news, there is no guarantee that January will follow a similar path,” said Joshua Shapiro, chief economist at MFR Inc., in a note to clients.

The government counts people as unemployed only if they are actively searching for jobs. Discouraged workers who have given up on looking are not included in the unemployment rate.

The nation’s work force, which includes both people working and those searching for jobs, shrank slightly in December and doesn’t look much different from last spring.

That is a concern because a strengthening job market normally encourages people to get out and look for work. And if more Americans are motivated to start looking for work, the unemployment rate could jump again.

There are also 8.1 million Americans working part-time who would rather be working full-time, though that number has fallen from 9.3 million in September and is the lowest since January 2009.

A measure that includes those groups, the so-called underemployment rate, was 15.2 percent in December. It has fallen three straight months but remains historically high.

A more robust hiring market coincides with data suggesting the economy ended the year with some momentum. Holiday sales were solid, and November and December were the strongest months of 2011 for U.S. auto sales.

Read Next
Gov’t keeps growth target for 2012
EDITORS' PICK
Alex Eala wins Grand Slam on Independence Day: ‘I hope I made my contribution to the country’
EDITORIAL: Good news, bad news
1Sambayan to nominees: Stick to word of honor
Trust Robredo’s political instincts – Kaya Natin! convener
Ahead of ONE: Full Blast II, Mongkolpetch warns Elias Mahmoudi: ‘Watch out for my fists’
Kai Sotto continues to inspire Filipinos by sharing his passions and stories with Smart Prepaid
MOST READ
Duterte, Mayor Sara unlikely to run under same slate in 2022, says Lacson
PH to have cloudy, rainy Monday — Pagasa
1Sambayan to nominees: Stick to word of honor
China cautions G7: ‘small’ groups don’t rule the world
Don't miss out on the latest news and information.