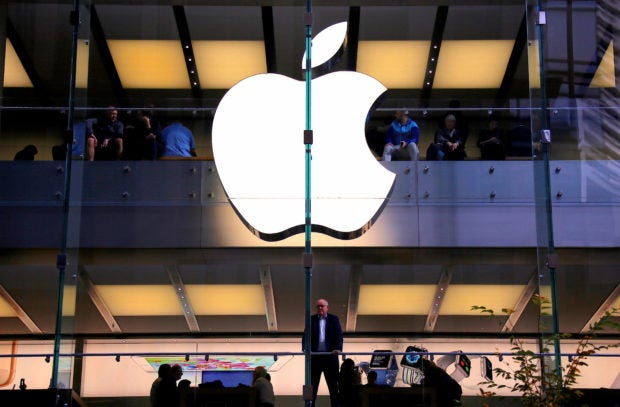 A customer stands underneath an illuminated Apple logo as he looks out the window of the Apple store located in central Sydney, Australia,. REUTERS/David Gray/File photo

SYDNEY  – Hundreds of Apple workers in Australia are preparing to go on a strike ahead of Christmas to demand better working conditions and wages, union leaders and staff said, a move likely to hurt the iPhone maker’s sales and services in the country.

The less than two-day strike by about 200 of Apple’s roughly 4,000 employees in Australia comes as the U.S. tech giant faces disruptions due to worker unrest in its main iPhone plant in China.

“This Christmas strike is a way for our members to take back their time with family and friends while management continues to refuse to give workers the most basic minimum rostering rights,” RAFFWU secretary Josh Cullinan told Reuters, adding management would be notified on Monday of the intention to strike.

Efforts to get management to the bargaining table immediately failed earlier this week, with Apple refusing to meet until February, he said.

Striking workers would walk out of Apple’s retail outlets at 3 p.m. (0400 GMT) on Dec. 23 and stay away throughout Christmas Eve, usually a peak time for sales of Apple iPhones, watches and other products.

The action would be nationwide but would have the greatest impact at two retail outlets in Brisbane, and one each in Adelaide and Newcastle where RAFFWU have the most members.

An Apple spokesperson declined to comment on the negotiations but said the company was “proud to reward our valued team members in Australia with strong compensation and exceptional benefits”.

In June this year Apple workers in Maryland became the first retail employees of the tech giant to unionise in the United States. On Thursday, the union set formal dates in January to start negotiations with Apple.

“You cant put a price on work-life balance,” said one Apple employee, who will join the strike but did not want to be identified over fears of being targeted by management.

“What we have ended up with Apple is an arrangement where all the non-mandatory benefits that allows a work-life balance to workers have been taken off.”

Other strike actions that have been continuing from earlier this year will also be escalated, RAFFWU said, including a ban on iphone repair and Apple Watch repairs for certain hours in some outlets, bans on answering the door in others, bans on conducting any sales, and bans on wearing the company’s festive red t-shirt.