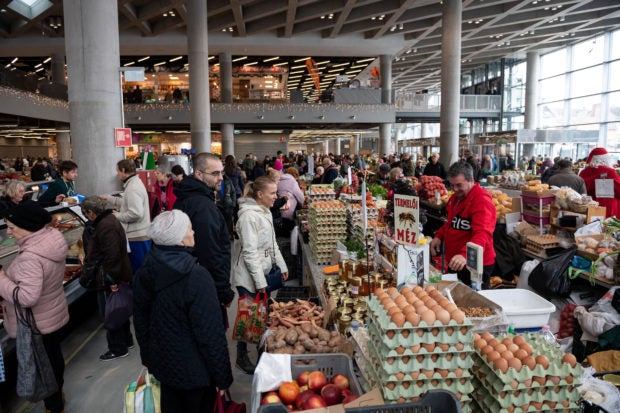 TISZAESZLAR, Hungary – Consumers in Eastern Europe are saving up to put their favorite carp and pork dishes on the table for Christmas as food price inflation, especially in Hungary and the Baltics, outpaces that in the wider European Union.

Food prices in Hungary were a staggering 45.2 percent higher in October than a year earlier, Eurostat data shows, with 10 countries in the EU’s east facing food price inflation of more than 20 percent. The cost of food was 33.3 percent higher in Lithuania and up 30 percent in Latvia compared to October 2021.

And while there are signs headline inflation may be peaking in some countries, food prices are still rising strongly, adding to a cost-of-living squeeze and forcing central banks to keep interest rates high even as economies start slowing sharply.

In Hungary, a severe drought decimated maize and wheat crops this year and caused animal feed prices to rocket, while the weak forint has raised import costs.

On their farm in Tiszaeszlar, eastern Hungary, Lajos Kander’s family rear more than 2,000 hairy “mangalica” pigs, a traditional breed prized for their meat.

The Kanders usually grow maize and wheat and produce their own feedstock. But the drought has forced them to buy some feed on the market, where Lajos Kander said maize and autumn wheat prices have nearly doubled from 2021.

“In 2023 we will face serious difficulties as we will have to buy feed, we’ll see at what price we can make up for the missing amount,” he said, adding that power, wage and veterinary costs had also risen.

The farm pays 29 forints per KWh for power under a contract which expires on Dec. 31, after which the bill will rise to 138 forints per KWh. Luckily, they have some solar panels. The annual cost of vaccinating their pigs has meanwhile tripled to 4.5 million forints.

The Kanders have raised prices by about 20-25 percent but Lajos Kander said further cost increases would be hard to pass on: “Businesses will have to swallow some of these costs … to be able to bridge this situation. We may want to get 2,000 forints for a kilo of pig, (but) no one will buy it.”

Food is now the main driver of Hungarian inflation, which data on Thursday is expected to show accelerating to 22.2 percent in November, with the scrapping of a cap on fuel prices set to give a further boost in future.

Czech headline inflation slowed to 15.1 percent in October but food prices grew, while in Poland food and non-alcoholic beverages inflation was 22.3 percent in November, well ahead of overall CPI at 17.4 percent.

National Bank of Hungary Governor Gyorgy Matolcsy said on Monday that inflation would average 15-18 percent next year, with food accounting for more than 50 percent of further rises.

“Hungary’s food industry operates with an unacceptably low productivity, and monopolies, with high share of imports and higher energy input,” he said.

In Lithuania, one of the Baltic States whose small, open economies are exposed to fluctuations in international commodity markets, central bank governor Gediminas Simkus struck a more optimistic note.

“Next time, we will see that the monthly inflation will go down a little bit, because the peaks in the prices of energy raw materials and food have already happened and hopefully they will not happen again,” he said last week.

Food sales fell 5.6 percent in Hungary in October as families faced with year-on-year rises of over 34 percent for meat and fish and 80 percent for bread made savings. Czech shoppers meanwhile grappled with a 105 percent rise in sugar prices while flour cost 45.4 percent more in Poland.

In a Budapest market, 75-year-old Eva Racz said she could not afford the traditional festive meal of carp this year.

“This will be a poorer Christmas, as our pensions are small and we need to pay for utilities and our medicine,” she said, adding that she and her husband live on pensions totalling 200,000 forints ($507.74) a month.

“We will have some broth, stuffed cabbage and roast meat and potatoes over Christmas,” Racz said. “I’m feeling desperate that this continues, and for how long?”

A survey by Barometr Providenta showed Poles would spend an average 1,259 zlotys ($281) on Christmas this year, 307 zlotys more than a year ago, even though almost half of those surveyed said they would buy cheaper products to keep costs down.

Inflation in Hungary is expected to start a very slow decline in the first half of next year.

“There are still no durable signs that the inflation dynamics are improving in Hungary,” Goldman Sachs has said.