Customers face prospect of higher rates as utility turns to the open market
By: Jordeene B. Lagare - @inquirerdotnet
Philippine Daily Inquirer / 02:09 AM December 07, 2022 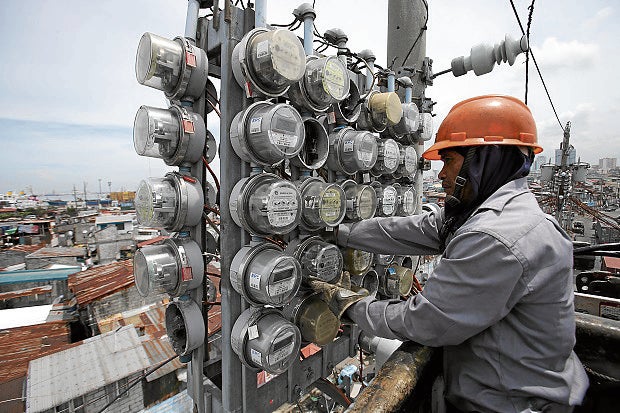 A Meralco lineman checking on some meters. (INQUIRER FILE PHOTO)

MANILA, Philippines — San Miguel Corp. (SMC) is walking away from its contract to supply electricity to Manila Electric Co. (Meralco) under its Ilijan power supply agreement (PSA), as it could no longer bear the mounting losses caused by the surge in fuel costs that it could not recover through current power rates.

SMC Global Power Holdings Corp. (SMCGP), the conglomerate’s power arm, notified Meralco that it would no longer supply Meralco the 670 megawatts under the Ilijan PSA effective Dec. 7 this year.

The decision was prompted by the rejection by the Energy Regulatory Commission (ERC) of the joint petition filed seven months ago by SMC and Meralco for a temporary power rate hike to recover the surge in prices of coal and natural gas needed to fuel SMC’s Sual coal plant in Pangasinan and natural gas-fired plant in Ilijan, Batangas.

It also follows the grant by the Court of Appeals of a temporary restraining order sought by SMC that will, in effect, temporarily halt the implementation of its 2019 PSA deal with Meralco.

SMC president Ramon Ang said in a statement that there was no intention to terminate the PSA from the beginning; hence, SMC and Meralco jointly sought a six-month temporary relief, which the regulator later rejected due to the fixed-price nature of the supply contract.

“From the very start, we were very transparent and clear with the ERC: We were not asking for a permanent increase, we did not want to be relieved of our contractual commitments, we were just asking for temporary, equitable relief, given the undeniable and unforeseen circumstances that affect not just us, but all Filipinos and many economies worldwide,” Ang said.

“Unfortunately, despite being shown that granting our petition would have been the cheapest option for consumers, the ERC still denied our petition, fully aware that this would force us to either continue absorbing significant losses—which no company can sustain—or terminate the PSAs, which would ultimately lead to higher electricity costs for consumers: much, much higher than what we were asking for,” Ang added.

SMGCP emphasized that the “right to unilaterally terminate” the contract is allowed under their long-term, fixed rate supply deal, particularly in the event of a “change in circumstances”.

SMC claimed that allowing the rate increase would have been the “least cost” option to Meralco, compared to the power distributor having to source emergency power supply, or conducting a new round of competitive bidding for power supply.

With SMC’s termination of the contract, Meralco will likely have to source power from the Wholesale Electricity Spot Market, the central venue for trading electricity as a commodity, where rates reflect the higher costs due the surge in global fuel prices following Russia’s invasion of Ukraine.

The ERC, meanwhile, is yet to be informed of the PSA termination.

“We have not received any notice yet from Meralco,” said ERC chair Monalisa Dimalanta, who had expressed concern over the TRO issued by the CA, saying it would expose about 7.5 million Meralco customers in Metro Manila and adjacent areas to higher electricity prices as the fixed rates in the current PSAs would no longer be enforced.

Your subscription could not be saved. Please try again.
Your subscription has been successful.
Read Next
WB: Global headwinds to slow PH growth in 2023 to 5.7%
EDITORS' PICK
Philippine-United States alliance ‘rock solid’ — DFA
Fuel price rollback expected on Feb 7
vivo Philippines offers a free bouquet of flowers and a premium necklace perfect for Valentine’s Day
Omega Speedmaster super racing: Tiny device massive change
House energy committee chair Arroyo bats for cheap electricity
Makabayan bloc blasts bid to expand US access to more military bases in PH
MOST READ
Vice Ganda gets called out for ‘unfair treatment’ of ‘It’s Showtime’ co-host Karylle
Fuel price rollback expected on Feb 7
Kris Aquino gets ‘renewed confidence’ after consultation with new doctor: ‘I have a strong chance of getting better’
Pokwang tells self amid revelations on past relationship: ‘Bangon, nanay ka’
Don't miss out on the latest news and information.