Cebu Landmasters Inc. (CLI) Chief Finance Officer Grant Cheng believes no one should feel at liberty to waste company resources, no matter how minute, whether it’s replacing a ballpen that has ink left or not printing on back-to-back pages.

“Not because it will make that much of a difference on the bottom line,” Cheng says, before catching himself, adding, “well, it will, still, somewhere in the decimals… But it’s establishing a certain ethos that what you’re handling is not your money. There’s no such thing as ‘pera ng kumpanya.’ It’s the buyers’ money, the banks’, the shareholders’. Most importantly, it’s our money.”

Laying the foundation for ethical integrity, he explains, is of primary importance as its principles apply anywhere from purchasing a ream of bond paper to signing a P5-billion transaction. This is especially true for the company’s finance team, whose bar for integrity and ethics is higher, “because we hold the money.” Cheng says: “That’s a value system that I carry with me and it’s something I hope I’ve been able to inculcate and share with the organization as their CFO.”

For exemplifying the qualities of an outstanding finance chief as a strategist, catalyst, steward, and operator, Cheng was bestowed with the 2022 ING-FINEX CFO of the Year Award at Palacio de Memoria in Parañaque City on November 24.

The 41-year-old becomes the youngest recipient of the prestigious recognition from the longest-running search that honors the country’s top finance chiefs. Cheng also makes history as the CFO of Cebu-based real estate development company CLI, being the first awardee from a non-conglomerate organization.

“I see this as an organizational award,” Cheng says. “I’m very humbled and very honored, but this is for the company and for everyone who has allowed me to be their leader, to set the strategy and the vision for how the financial aspects of a company should be run and managed.” 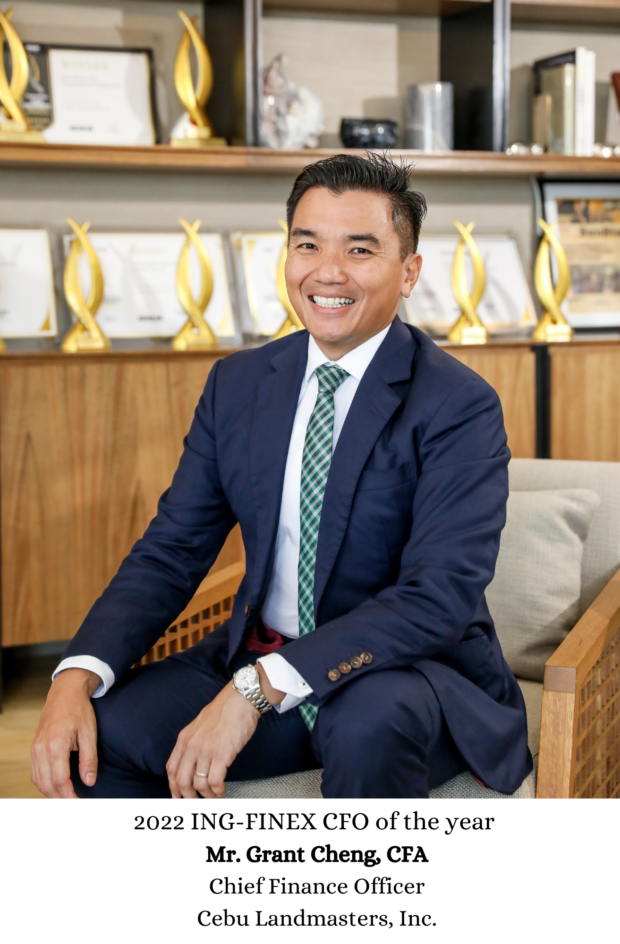 Another milestone achievement of Cheng with CLI is securing a credit rating upgrade for the company. In June 2022, the Philippine Rating Services Corporation (PhilRatings) assigned an Issue Credit Rating of PRS Aa plus with a stable outlook for Cebu Landmasters Inc.’s (CLI) maiden peso-denominated fixed-rate bond issuance of P5 billion. PhilRatings also upgraded the issue credit rating for CLI’s outstanding series A to C corporate notes worth P5 billion to PRS Aa plus with a stable outlook.

“It’s important for a lot of institutions and investors, pension funds, insurance companies, asset managers, even retail investors, who may not be familiar with our business model, to have a credible ratings agency like PhilRatings come and do their due diligence to our books and reinforce what we’ve been saying all along: That we offer a compelling investment opportunity once we issue our debt instruments out in the market,” he says.

Cheng played a pivotal role as well in CLI’s remarkable performance during the past few pandemic years. The company remained profitable through the implementation of cost and budget monitoring processes, along with the establishment of approval limits and authority policies. Cheng ushered digital transformation as well that allowed business to continue. Virtual launches for projects, digital tours and the development of an online collections portal enabled CLI to increase sales even as profit declined—a dip, however, that ranks as the lowest in the industry.

“I always say that if you want to lead your company from a financial point of view, you have to be in control of your past, your present and your future,” Cheng says. “It’s not that you know what’s going to happen, but planning for a certain baseline of assumption makes it easier to adapt.”

It’s a level of astuteness that has won Cheng and CLI various prestigious award in recent years. Most recently, in the 10th annual PropertyGuru Philippines Property Awards in October, CLI was honored as the Best Developer in Visayas and Best Developer in Mindanao. The group also took home special recognitions for promoting the principles of Environmental, Social, and Governance (ESG) and Sustainable Design & Construction.

The awards prove that Cheng remains unfazed by the challenge of leading a relatively young and small company against more established giants. He said representing a non-conglomerate company is not necessarily an advantage to his win as the ING-FINEX CFO of the Year, but a differentiator.

“I hope it offers the perspective that financial excellence and good governance is not an exclusive reserve of large, mature companies,” he says. “To reach higher levels in business, you should have a good financial operation in place to support that growth.”

Aside from dealing with numbers, Cheng enjoys playing golf, going on dives, and, of course, spending time with his family.

“Work and family, that’s what really matters,” he says. “I want to be able to provide my family with a legacy where if they see how I work, if they see what I can accomplish in business, it’s something that they can look up to.” 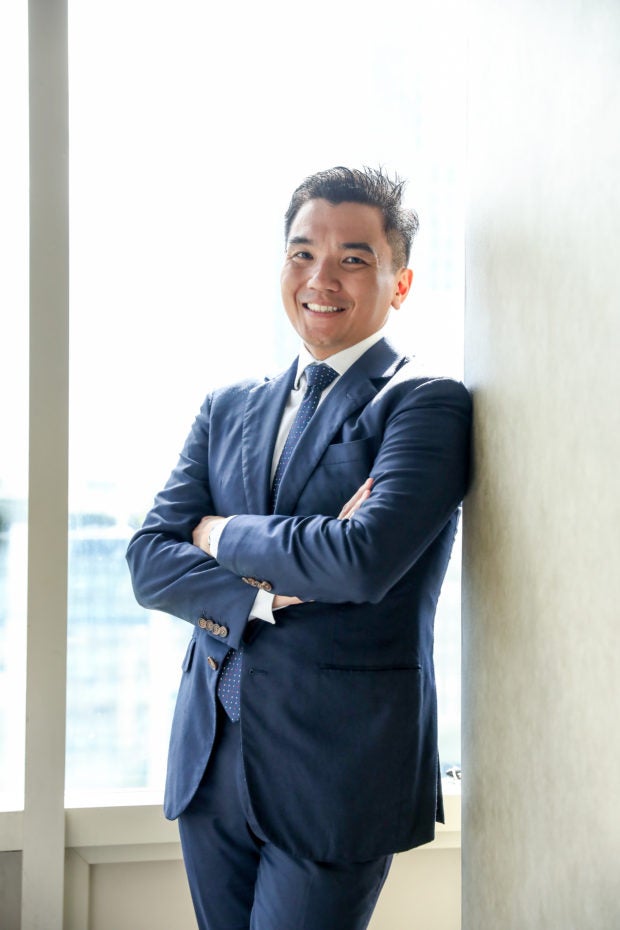 That something is already commended highly by Cheng’s colleagues and team members, as he exemplifies a truly game-changing CFO. CLI Chairman, President and CEO Jose Soberano III, for instance, credits Cheng for serving as a “vital cog” to the company’s tremendous growth.

“Grant is a team player, an across-the-board type of leader,” Soberano says. “He studies his craft very well. If there are issues that are on his table, he makes sure that he is able to weigh things very carefully before he goes to us to lay down the options, putting in the pluses and the minuses, to be able to arrive at a good decision.”

CLI EVP and Treasurer Marose Soberano lauded Cheng for streamlining processes in accounting and finance. Being clear and organized were the same qualities that she noticed in Cheng when they first met. Cheng was with BDO Capital then, leading the team that guided CLI to go public in 2017.

BDO Capital & Investment Corporation President Ed Francisco remembers Cheng as a hard worker who always demonstrated initiative. “Grant was able to deliver and learn to become a CFO good enough to be recognized as the ING-FINEX CFO of the year,” he says. “It is very inspiring  because it shows that you have ambition and if you are willing to work hard, you will be recognized and be rewarded.”

“Grant and I are partners: He handles the books, I handle the field, but at the same time, we are one,” he says. “He walks the talk and dives into the operations. Grant does not hide behind the numbers; he drives the numbers.”

For CLI Senior Vice President and Marketing Director Joie Soberano-Bergundthal, Cheng stands out as “very good communicator” and a “relatable leader.” She views him as someone who’s not intimidating or simply focused on numbers, but a leader who can translate finance concepts into simple language that keeps his audience engaged. “Grant serves as a catalyst for our growth,” she says.

“Leader” is also the chosen word by CLI employees who report to Cheng to describe him.

“He’s able to provide a different perspective that is more holistic, along with solutions, that are meaningful and valuable to the company,” says Atty. John Edmar Garde, CLI Legal Counsel and Compliance Officer. For Connie N. Guieb, CLI Vice-President for Finance and Accounting, Cheng empowers them to feel confident in everything they do, in and out of the office. CLI Senior Corporate Finance Manager Clarissa Cabalda adds that the company and Cheng were destined for each other.

“Sir Grant is really meant for Cebu Landmasters Inc.,” she says. “When he became the CFO, the transition was really very seamless. It felt like he always had been with CLI as he really understood the numbers and knew the background very well.”

That brand of diligence stems from Cheng’s first instinct of surveying the type of work needed to achieve something. What has to be done? What does he need to study? This mentality also serves as his advice to the next generation of Filipino financial leaders.

“Work,” Cheng says bluntly. “Get your fundamentals right. Know the theories and fundamentals by heart so that no matter how the numbers are presented to you, you know what needs to be done.”

He adds: “Remember also that if you fail to plan, you plan to fail. A lot of the work in financial management comes in the financial planning stage. If you put the work in, you’ll be in a much better position to handle challenges and unexpected things that come your way. That’s my advice to anyone who might want to emulate what we do.”

For more information about the ING-FINEX CFO of the Year Award, visit www.ingfinexcfooftheyear.com.