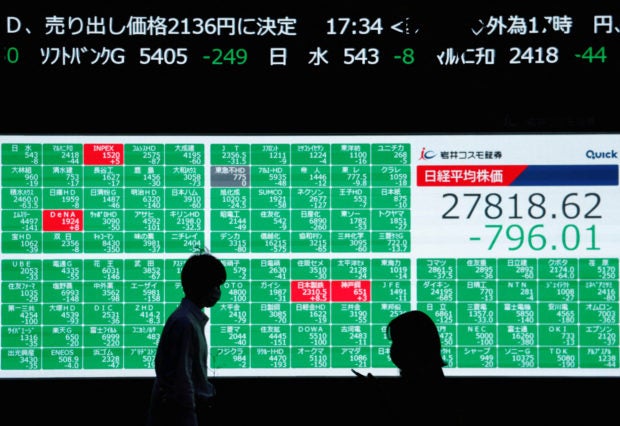 SYDNEY  – Asian share markets were mixed on Tuesday and oil was weaker as investors sought to digest the economic implications of China’s COVID policy adjustments and a rescue package for the country’s struggling property sector.

In Hong Kong, the Hang Seng Index was flat while China’s CSI300 Index was down 0.3 percent.

Some Chinese cities have begun cutting routine community testing, days after China announced an easing of some of its heavy-handed coronavirus measures. At the same time, however, COVID case numbers in the country have grown.

Chinese property stocks were giving up the some of the steep gains made a day earlier on the rescue package.

Jack Siu, China chief investment officer at Credit Suisse, said that “while the COVID changes and housing package will alleviate some of the downside risks it won’t be enough to meaningfully boost Chinese economic growth yet.”

Chinese data out on Tuesday was also not encouraging.

Industrial output rose 5 percent in October from a year earlier, slowing from the 6.3-percent pace seen in September while retail sales fell 0.5 percent, the first drop since May when Shanghai was under a city-wide lockdown. Analysts had expected retail sales to rise 1 percent.

“Surging case numbers continue to be a key downside risk. Another round of lockdowns cannot be ruled out if cases keep rising,” ANZ economists said on Tuesday.

In Asian hours, Bitcoin rose 1.1 percent to $16,593. U.S regulators opened probes into the collapse of crypto exchange FTX while other major crypto exchanges have rushed to assure investors of their stability in the FTX fallout. Bitcoin remains down 64.2 percent so far in 2022.

Inflation in the United States remains at the top of the mind for many global investors who are waiting for producer price index data later on Tuesday.

The European single currency was down 0.1 percent at $1.0317, having gained 4.4 percent in a month, while the dollar index, which tracks the greenback against a basket of currencies of other major trading partners, was largely flat at 106.99.

Yields on benchmark 10-year Treasury notes rose to 3.8686 percent compared with the U.S. close of 3.867 percent on Monday.

The two-year yield, which rises with traders’ expectations of higher Fed fund rates, touched 4.4014 percent compared with a U.S. close of 4.408%.