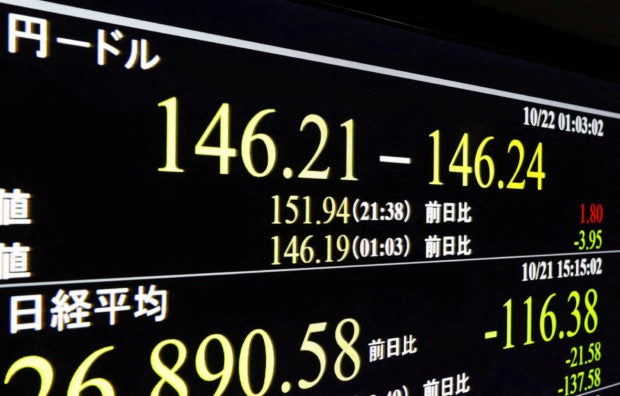 TOKYO  -Japan’s top currency diplomat Masato Kanda said on Friday he was closely watching foreign exchange market moves with a sense of urgency and that authorities were ready to take action, if needed.

The dollar fell sharply as U.S. consumer prices rose less than expected in October. The Japanese yen at one point climbed by its biggest single-day rise since 2008, hitting 140.9350 to the dollar.

On Friday morning in Tokyo, the dollar was fetching around 141.57 yen.

The yen’s sharp rises came after it fell by more than 20% against the dollar this year, prompting authorities to step into the market in September to prop up the yen for the first time since 1998. They intervened further last month when the dollar strengthened to 32-year high close to 152 yen.

In the past, Japan’s interventions were conducted mostly to weaken the yen and support the export sector, by buying the dollar and selling the yen.

The latest dollar falls may complicate Japan’s response to the currency market.

The U.S. Treasury Department on Thursday said no major trading partner manipulated its exchange rates to gain unfair competitive advantage through June 2022. The bulk of interventions seen were aimed at strengthening currencies, not weakening them, Treasury said in a semi-annual report.

“I understand that it describes (Japan’s currency policy) as highly transparent,” Kanda added.