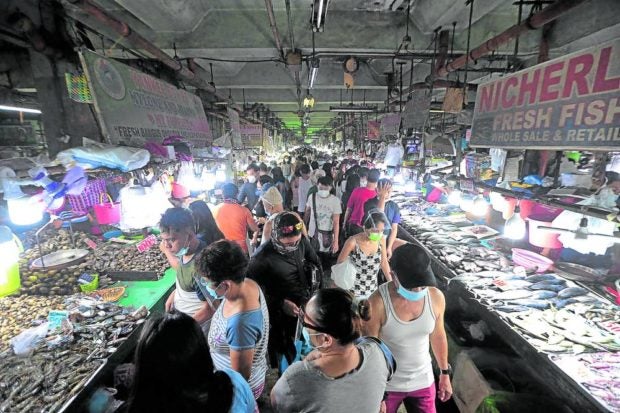 Inflation in the Philippines will likely remain elevated for longer than expected, as upward price pressures in the global food market remain, dragging on the recovery of domestic supplies ravaged by a recent series of typhoons.

GlobalSource Partners said in a commentary that they raised their forecast for the average inflation in 2022 to 5.8 percent from 5.6 percent previously.

The New York-based think tank did so after the Philippine Statistics Authority reported a 7.7-percent inflation in October, which brought the January to October average to 5.4 percent.

“[This] inflation surprise, alongside more recent damages to agricultural output due to typhoons, as well as net upside risks from global and local factors, can be expected to further feed into inflation expectations,” said Romeo Bernardo, who penned the brief.

On Friday, National Statistician Dennis Mapa said it was not certain that inflation had peaked in October, as some forecasts said.

Mapa added that there was a substantial probability that November inflation could be even higher.

Bangko Sentral ng Pilipinas (BSP) Governor Felipe Medalla himself said inflation in the Philippines might reach its peak either in November or December, after which this would slowly go down.

The BSP’s latest forecast pegged inflation in 2022 at 5.6 percent to 5.7 percent, with the 2023 readout receding “closer to 4 percent” or the upper end of the central bank’s target range of 2 to 4 percent.

GlobalSource Partners’s higher forecast for 2022 takes into consideration that inflation was likely to stay above the BSP’s upper end 4-percent target for longer. This, in turn, “will take the 2023 average inflation rate closer to 5 percent.”

Across the globe, the downtrend in overall food prices almost ground to a halt with the Food Price Index of the United Nations’ Food and Agriculture Organization (FAO) registering at 135.9 points in October from 136 points in September.

The index has been receding month after month since 159.7 points in March—even dropping by as much as 14.1 points to 140.6 in July—but the FAO said that it was “virtually unchanged” in October.

FAO data show that rising prices of cereals offset decreases in all four of the other commodity groups in the index—vegetable oil, dairy, meat and sugar.

Prices of all cereals—including wheat, rice, corn and barley—went up in October compared to September.

“International rice prices remained on an uptrend in October, as the bulk of new crop arrivals were still forthcoming in Asia, although low demand limited the monthly price increase to one percent,” the FAO said. INQ