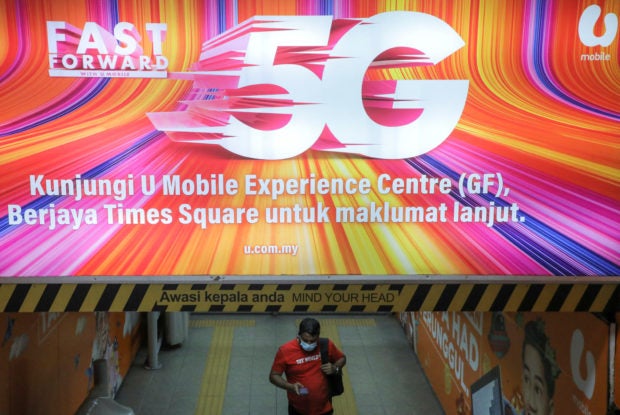 An advertisement of 5G network by U Mobile carrier is displayed in Kuala Lumpur, Malaysia, Sept 26, 2022. REUTERS/Hasnoor Hussain/File photo

KUALA LUMPUR  – Five Malaysian mobile operators have agreed to use the government’s state-owned 5G network, paving the way for 5G services to be rolled out to customers after months of delayed talks.

Malaysia’s 5G plans had been repeatedly set back since last year amid an impasse between the government and major carriers over pricing and transparency, including concern that a sole state-run network would result in a nationalised monopoly.

The government has said a single shared network would reduce costs, improve efficiency and speed up infrastructure works.

In its statement, U Mobile said it would begin making 5G services commercially available to its customers from Thursday.

The updated RAO was expected to be published upon approval by Malaysia’s communications regulator, DiGi said.

Another operator, Maxis Bhd, said it was still assessing the governance requirements for the access agreement.

Maxis, Celcom, DiGi and U Mobile – the country’s four major telco firms – had earlier requested the government review the RAO, describing its pricing model as “not commercially viable”, Reuters had reported in May.

The signing of the access agreements comes after Celcom, DiGi, Telekom and YTL agreed to take up a collective 65 percent stake in DNB this month.