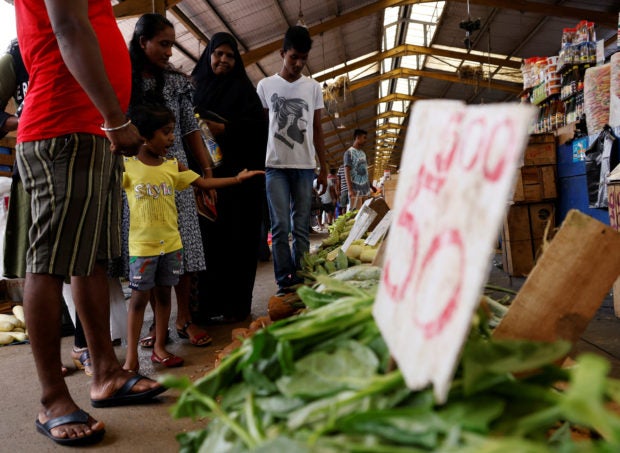 A family look around vegetables at a market in the rampant food inflation, amid Sri Lanka’s economic crisis, in Colombo, Sri Lanka, July 30 , 2022. REUTERS/Kim Kyung-Hoon

The still extremely elevated Colombo Consumer Price Index (CCPI) reflected a 85.6 percent jump in food prices in October and a 56.3 percent climb in the non-food group, the Census and Statistics Department said in a statement.

However, the pace of food inflation slowed from a all-time high of 94.9 percent in September.

Sri Lanka has been struggling with soaring inflation for nearly a year, partly triggered by its worst financial crisis in seven decades and a ill-thought out ban on chemical fertiliser implemented last year, which has since been reversed.

“We are finally seeing a drop in inflation and expect this to continue over the next few months. However, inflation is only likely to hit single digits after the second quarter of next year,” said Dimantha Mathew, head of research at First Capital Holdings.

The CCPI, released at the end of each month and closely watched by central bank policymakers, acts as a lead indicator for broader national prices and shows how inflation is evolving in Colombo, Sri Lanka’s biggest city.

In an effort to tame prices and stabilise markets, the Central Bank of Sri Lanka (CBSL) has raised interest rates by 900 basis points so far this year. Its final policy announcement for the year will be in the last week of November.

Sustained high inflation would make it tricky for the government to introduce fresh indirect taxes in its upcoming budget for next year that will be presented to parliament on Nov. 14, analysts said.

Higher taxes are essential to boost public revenue to anchor fiscal consolidation and lock down a $2.9 billion bailout program with the International Monetary Fund (IMF).