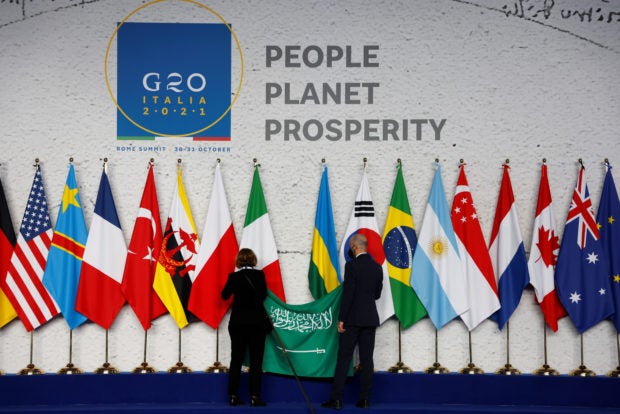 Employees arrange the Saudi Arabian flag during the final preparations before world leaders gather for the official family photograph on day one of the G20 leaders summit at the convention center of La Nuvola, in Rome, Oct 30, 2021. Ludovic Marin/Pool via REUTERS

LONDON/WASHINGTON  – A failure to secure meaningful progress on a debt relief for the world’s poorest nations at the International Monetary Fund and World Bank annual meeting in Washington has left policymakers, campaigners and investors frustrated.

Two years ago the Group of 20 launched the Common Framework – a mechanism designed to provide a swift and comprehensive debt overhaul to nations buckling under debt burdens after COVID-19 shock that would reach beyond temporary debt payment moratoriums.

But results have proven elusive, hampered by a combination of a lack of progress in bringing key creditors around the table and getting them to commit to joint action, and establishing debt parametres that form the basis of talks as well as political upheaval in some of the countries.

The world’s poorest countries face $35 billion in debt-service payments to official and private-sector creditors in 2022, more than 40 percent of that is due to China, the World Bank found.

“Time is not our friend, interest rates are up, the dollar has appreciated and the debt burden has become heavier,” IMF chief Kristalina Georgieva told a conference in London after the Washington gathering ended mid-October.

Debt restructurings can be protracted, getting a multitude of parties to agree on a shared process is no mean feat. But doubts are rife with progress having been glacial.

“It isn’t a perfect instrument. I take responsibility for that as being one of the negotiators,” Guillaume Chabert, IMF deputy strategy chief who helped design the Common Framework during his time at the Paris Club, told a panel in Washington.

“We need a fast, quick, orderly, reliable, predictable mechanism. The Common Framework is a good start, but you need some fixes.”

To Zambia, Africa’s first COVID-era default in 2020, it was still unclear who will lead talks for renegotiating its nearly $6 billion debt with China.

Ethiopia’s debt restructuring has ground to a halt with the country engulfed in a civil war.

Official creditors found that Chad, the first to request Commond Framework treatment in January 2021, might not need debt relief after all thanks to the oil price surge, though they signalled readiness to reconvene if needed.

Especially Chad’s experience could dissuade other countries from applying for relief, experts said.

Chabert said there was still a chance Chad’s creditors would fail to finalise their memorandum of understanding or its biggest private creditor, commodities firm Glencore, would back out, which would effectively halt existing IMF and World Bank programs.

China’s role as a lender to poorer nations and Beijing’s foot-dragging on debt relief drew much ire at the Washington meeting. U.S. officials warning this could burden dozens of low- and middle-income countries with years of debt servicing problems, lower growth and under-investment. U.S. Treasury Secretary Janet Yellen and other Western leaders gathering in Washington ratcheted up criticism of China, the world’s largest bilateral creditor, as the main obstacle to moving ahead with debt restructuring agreements.

Chabert said that in addition to speeding up the process, it was important to ensure the comparability of treatment for the much more diverse set of creditors now involved.

JPMorgan’s Joyce Chang, whose bank held an investor seminar alongside the IMF World Bank gathering, said asset managers had more discussions on repayment challenges and restructurings for emerging markets than at any time since the 1990s.

“Solutions remain elusive, and there was open discussion about the shortcomings of the common framework,” said Chang, chair of global research and the strategic research team at the Wall Street bank, in a round up of the meetings.

For Kevin Gallagher, director of the Boston University Global Development Policy Center, the U.S. Treasury also needs to get more forceful with private creditors, as it did during the heavily indebted poor countries process or in Iraq.

“We showed during the 1990s that we can compel the private sector to come to the table through carrots and sticks and we’re just not willing to do it,” he said, acknowledging the debt restructuring regime amounted to a “huge problem”.

“It’s like walking into an emergency room with a bleeding head wound, and being told that you’re fine.

Your subscription could not be saved. Please try again.
Your subscription has been successful.
Read Next
Saudi Arabia launches bid to attract $10B in supply chain investments
EDITORS' PICK
House energy committee chair Arroyo bats for cheap electricity
Omega Speedmaster super racing: Tiny device massive change
CBCP releases litany of thanks for better health
Smart launches first joint Telco TVC for Donbelle
US gets access to more PH bases
12-year data track poor training of PH teachers
MOST READ
Sandara Park ‘got in trouble’ for not pressing elevator button for a company head
Republicans oust Ilhan Omar from high-profile US House committee
US gets access to more PH bases
Bullet found in Kian’s neck after 5 years, 2 autopsies
Don't miss out on the latest news and information.