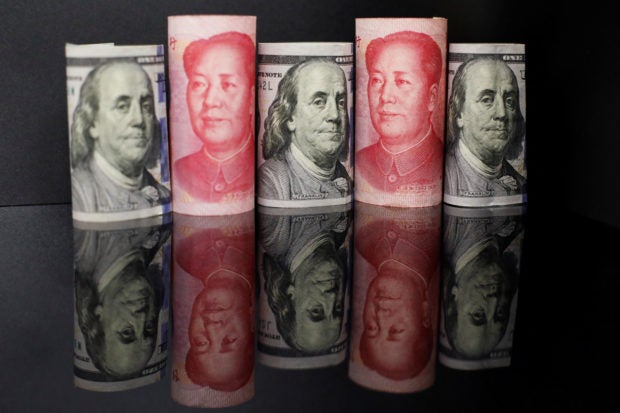 SHANGHAI/HONG KONG  – Cash is leaving China’s financial markets at the fastest clip in years as investors flee a falling currency and sputtering economy, and analysts point to hints that more money is being moved out of the country along back channels in a further sign of flagging confidence.

The flows, mostly out of the bond market, reflect the attraction of higher interest rates elsewhere.

But their size and signs that they are spreading beyond foreigners’ portfolios highlights fragility in domestic confidence – a potential drag on the yuan in future – and the magnetic effect of a rising U.S. dollar on global capital flows.

“Everyone is suffering from the storm of U.S. interest rate rises,” said wealth manager Liu Yuan. “U.S. dollar assets are in the eye of the storm. It’s a haven of breeze and sunshine (while) life is hard on the periphery.”

Officially, China’s national financial accounts, which cover stock and bond markets and direct investment flows, show a net $101 billion was pulled out over the six months to June, putting 2022 on track to record the largest annual such outflows since 2016.

Monthly debt market data shows foreign investors have been net sellers for seven straight months to August as what had been a lucrative yield premium in China vanished as U.S. interest rates soared.

To be sure, exports mean China’s current account balance is still positive and not every asset class is seeing outflows – with equities actually attracting modest inflows.

But a sizable $45.2 billion net outflow in the balance of payments under the category as “errors and omissions,” has some economists suspecting that money is being moved out of the country via illegal or semi-legal channels.

“It’s not just foreign asset managers no longer investing in China, it’s the unrecorded outflows that are worsening,” she said as confidence wavers. “People want to bring their money out.”

The yuan has depreciated more than 11 percent on the dollar this year.

Unlike most of its global peers which are rapidly tightening policy to tame red-hot inflation, China is cutting lending rates to support its sharply slowing economy. The housing market, where most Chinese have their largest assets, is in a sharp downturn, and youth unemployment has hit record highs.

Amid foreign investors’ exodus, there are signs of locals following as fast as allowable under capital controls that were tightened after the previous season of heavy outflows in 2016.

Outbound investment under the cross-border Bond Connect, which links mainland China with Hong Kong and global markets, totalled 301.5 billion yuan ($42 billion) at the end of August, up 34 percent from a month earlier and up 19-fold since March.

“All types of assets are falling this year, expect for a few money type products pegged to the U.S. dollar,” said Liu Yaolong, marketing manager at GaoTeng Global Asset Management which has been promoting such funds to Chinese investors.

Subscriptions for the Qualified Domestic Institutional Investor (QDII) scheme are up 80% in the eight months to August to 322.8 billion fund units.

A survey published recently by HSBC also showed that 85 percent of investors who have money in foreign products via a cross-boundary Wealth Management Connect Scheme, planned to invest more in the next 12 months.

Signs of unrecorded flows are more difficult to detect, and the “errors and omissions” data in the national accounts is inconclusive. Moving money is also very difficult as COVID-19 curbs on travel add another layer to capital controls.

Still, migration can provide an excuse for shifting cash, and brokers have noticed a surge in enquiries about studying.

Data from consultancy Education International Cooperation showed a 41.5 percent jump in queries about study in Hong Kong between January and July, compared with the same period a year earlier.

Family offices abroad can also become hubs for global investing. About 300 new family offices opened in Singapore last year, according to the Monetary Authority of Singapore.

Investors from Hong Kong, Macao, and Guangdong province accounted for 44 percent of newly set up family offices in Singapore for the first four months this year, up from 39 percent for all of 2021, according to Chinese language newspaper Lianhe Zaobao in Singapore.

Purchasing insurance products in Macau, where the border with the mainland remains open, has been another popular back-channel that is anecdotally seeing renewed interest. The products purchased by mainland visitors are usually denominated in U.S. dollars, providing a hedge against a weak yuan, and carry an attractive long-term yield.

Agents involved say persistent lockdowns and uncertainty over China’s property market are also factors besides the weakening currency. If they were to persist, opening China’s borders could unleash fresh flows and currency selling.

“I won’t say renminbi depreciation is the only trigger,” said an agent for insurer AIA, who requested anonymity as the topic is sensitive. They expect a rush to Hong Kong products when the border between Hong Kong and the mainland reopens.