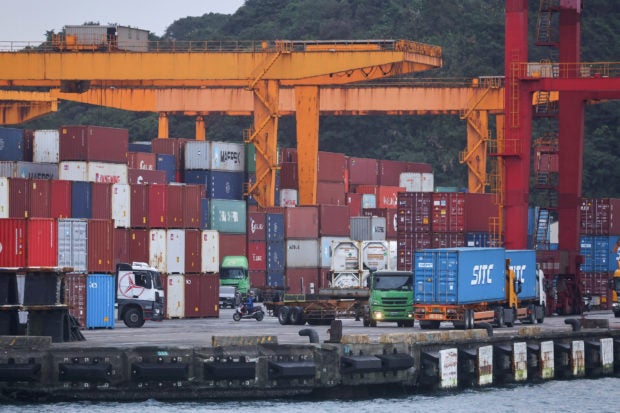 TAIPEI – Taiwan’s exports fell in September for the first time in more than two years on weakness in demand in major market China and stagnant consumer spending even as chip demand held up, with the government predicting more turbulence ahead.

Exports fell 5.3 percent in September from a year earlier to $37.53 billion, the Ministry of Finance said on Friday, logging a contraction for the first time since June 2020.

That was compared to the 2 percent rise recorded in August, and well below a forecast for a 1.5-percent increase in a Reuters poll.

Ministry official Beatrice Tsai said exports were coming off a high base last year, when the COVID-19 pandemic boosted demand for work-from-home gear like tablets, but the “root case” was the effect of high inflation, monetary policy tightening, and stagnant consumer demand from the cooling of China’s economy.

Exports to China, Taiwan’s largest trading partner, fell an annual 13.3 percent to $15.17 billion in September, after a 9.9 percent contraction in August, in a sign of the continued economic problems there.

China will not release its trade data until Oct. 14, after the end of the weeklong National Day holiday which began on Oct. 1.

However, Taiwan’s overall exports of electronics components in September rose 2.4 percent to $16.99 billion, with semiconductor exports up 3.5 percent from a year earlier.

Many companies expect global chip shortages to last at least for the rest of the year, which will continue to bolster Taiwanese semiconductor firms’ order books even as demand for some consumer electronics weakens.

Firms such as TSMC, the world’s largest contract chipmaker, are major suppliers to Apple Inc and other global tech giants, as well as providers of chips for auto companies and lower-end consumer goods.

The finance ministry warned of trouble ahead from monetary policy tightening in the United States and Europe with manufacturing in various countries slowing significantly, saying there were “deepening doubts” about the outlook.

These problems may “highly impede our export performance in the fourth quarter”, it added.

September exports to the United States were down 2.1 percent , compared with the 2.3 percent rise recorded the previous month.

Taiwan’s September imports fell 2.4 percent to $32.51 billion, worse than economists’ expectations of a 7% rise and after an expansion of 3.5 percent in August.

Taiwan could see October exports contract in a range of 3 percent to 6 percent from a year earlier, the finance ministry said.