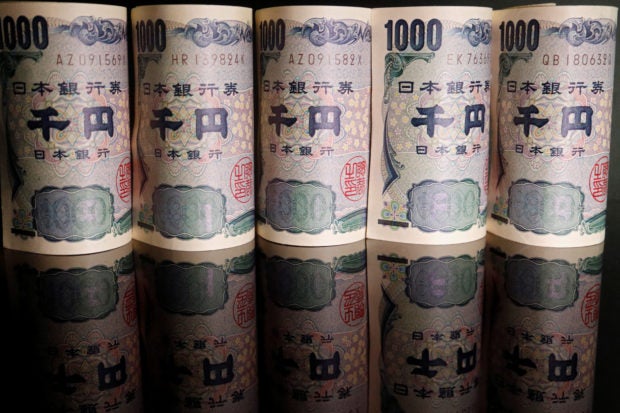 Banknotes of Japanese yen are seen in this illustration picture. REUTERS/Florence Lo/Illustration

TOKYO – Japan’s foreign reserves fell by a record to $1.238 trillion at the end of September as a result of the government’s dollar-selling intervention during the month to arrest a sharp decline in the yen, Ministry of Finance data showed on Friday.

The amount compared with $1.409 trillion seen a year ago and was the second straight month of year-on-year decrease in Japan’s foreign reserves, which is the world’s second largest in size after China.

The decline in the reserves was reported after separate MOF data that showed last week Japan spent up to a record 2.8 trillion yen intervening in the market last month.

The drops in deposits and securities meant these two types of assets were likely used to finance the latest intervention.

The MOF does not reveal the makeup of currencies in the reserves, a bulk of which is believe to be in the U.S. dollar from the past practice of dollar-buying, yen-selling intervention to prevent a strong yen from damaging exporters.

Yen-buying, dollar-selling intervention has been rare in Japan which has long counted on exports of cars and electronics as a key driver of economic growth.

Now, policymakers are concerned more about the impact of sharp and one-sided yen weakening on a nascent economic recovery from the COVID-19 pandemic as it drives up living costs while making it harder for business planning.

The previous record amount for a single day intervention was 2.6 trillion yen spent in April 1998 during the 1997/98 Asian financial crisis.

Investors are closely watching daily intervention data for the July-September period due out in November to see whether authorities conducted ‘stealth intervention,’ or intervening without official announcement.

Japan had not conducted dollar-selling, yen-buying intervention since 1998, until the authorities forayed into the market on Sept. 22 when the Japanese currency dropped sharply to a 24-year low near 146 yen to the dollar.