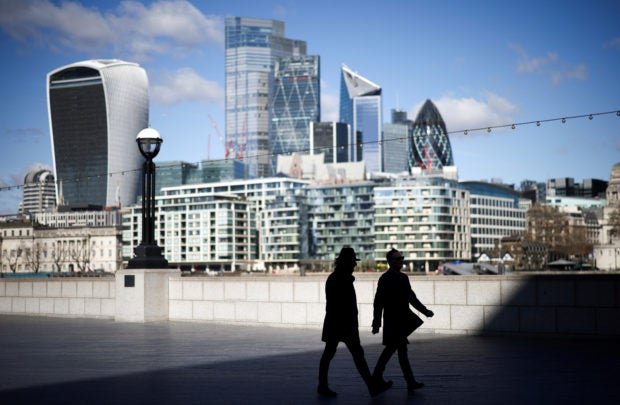 The City of London financial district can be seen as people walk along the south side of the River Thames, amid the coronavirus disease (COVID-19) outbreak in London, Britain, March 19, 2021. REUTERS/Henry Nicholls/File photo

LONDON  – The British government is expected to reverse the proposed scrapping of the highest rate of income tax that has sparked a backlash in the governing Conservative Party, the BBC reported on Monday.

Finance minister Kwasi Kwarteng sent shockwaves through financial markets when he published a mini-budget on Sept. 23, cutting taxes including the 45p highest rate of income tax, in a “growth plan” to be funded by vast government borrowing.

The government had stuck to the policy, even as the value of the pound and government bonds fell, but several senior lawmakers have stepped up their opposition to it at the party’s annual conference which began on Sunday.

On Sunday, former minister, Michael Gove, long at the heart of government, hinted he might vote against cutting taxes for the wealthy.

Kwarteng had planned to tell the conference on Monday that the government “must stay the course” and he was confident the plan was the right one, according to advance excerpts released by his team.

The BBC said the government was expected to make an announcement in the next hour. No one at the Treasury was immediately available to comment.

Kwarteng has said he will set out his funding plans on Nov. 23 in a full fiscal statement.