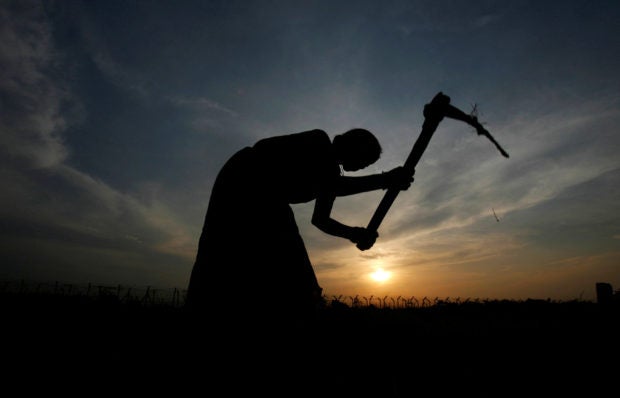 A farmer working in a paddy field is silhouetted against the setting sun on the outskirts of Agartala, capital of India’s northeastern state of Tripura. REUTERS/Jayanta Dey/File photo

MUMBAI/NEW DELHI  -India is likely to receive above-average rainfall in October, an official with the state-run weather office said on Friday, posing risks for summer-sown crops such as rice and the planting of wheat.

Heavy rains in October could damage ripening crops such as rice, pulses, cotton and soybeans, and may delay wheat planting in parts of India, the world’s leading producer of an array of farm goods.

Scant rain in eastern and northern India in the first half of the June-September monsoon season had already hit rice planting, forcing the government to cut output estimates and restrict exports to ensure adequate supplies for the country’s 1.4 billion people.

The curbs came on the heels of a ban on overseas sales of wheat after a sudden rise in temperatures in March and April shrivelled the crop.

Although monsoon rains were patchy in Bihar, Jharkhand, Uttar Pradesh and parts of West Bengal – some of India’s major rice-producing states – overall summer rains were 6 percent higher than average during the four-month season as central and southern regions received torrential downpours.

India is increasingly seeing uneven monsoon rains, raising concerns about food output. Rains are also getting more intense during the tail end of the season, and lingering.

This year, the monsoon could last longer than normal, especially in northern India, Mohapatra said.

“Crops are getting ready for harvesting and they need dry weather,” said a New Delhi-based dealer with a global trading firm.

“Excessive rainfall could damage crops, especially rice in Uttar Pradesh, Bihar and West Bengal,” said the trader who did not wish to be identified in line with his company’s policy.

Within weeks of harvesting the rice crop, millions of Indian farmers start planting wheat in October. Growers harvest the wheat crop in March and April.

Monsoon rains are critical for India’s farm-dependent economy, as almost half of the country’s farmland goes without irrigation. Farming accounts for nearly 15 percent of India’s almost $3-trillion economy and sustains half of its population.