Vain amid pain: Pinoys splurge more on hygiene than food during calamities 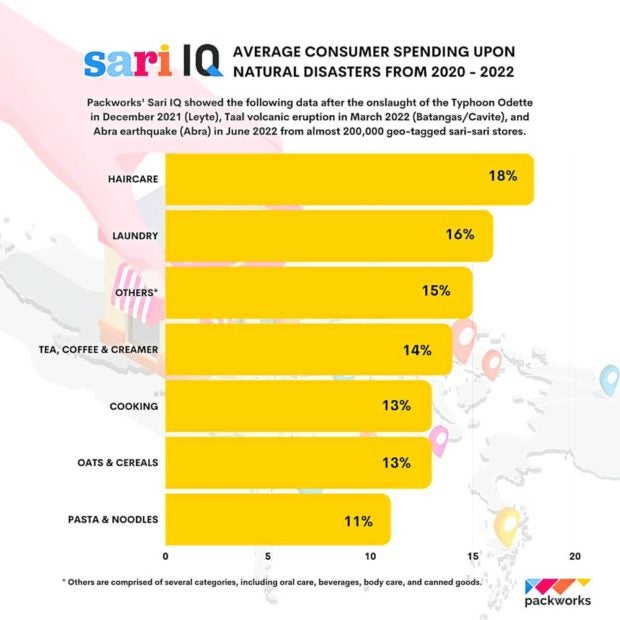 WHAT’S ESSENTIAL? These are the top items that Pinoys buy from sari-sari stores during calamities. —Packworks chart

Tending to your hair and clothes more than stocking up on food or water during natural disasters might seem peculiar and counterintuitive at first glance, but it is what it is, at least for many Filipinos.

Philippine startup Packworks surveyed the items bought at sari-sari stores during three major disasters in recent history—the onslaught of typhoon Odette in Leyte in December of 2021, the Taal volcanic eruption in March of 2022 and the Abra earthquake last June. They found that shampoo and laundry detergent had topped the list of store-bought items during these times of distress, accounting for almost a fifth of sales in these small mom-and-pop stores.

Now, a fifth might not seem a big deal but the fact that they scored higher than those which people would typically consider as more important, such as food and beverages, might seem a bit odd to some.

According to the survey, 18 percent of the average total sales volume consisted of hair care products, while laundry supplies and tools came in close at second with 16 percent.

It was only at the third subcategory of bought items did food begin to appear.

Categorized as “others” at 14 percent were oral care, body care, beverages and canned goods.

Breakfast items including tea, coffee, and creamer came, as well as oats and cereals took 14 percent and 13 percent, respectively. Pasta and noodles, on the other hand, came in at 11 percent.

Considering that the Philippines is an instant noodle country, it’s actually quite surprising that noodles ranked last in the list.

“Filipinos generally have a pragmatic yet sophisticated view when it comes to their beauty product priorities. They have always associated beauty and hygiene with dignity and self-respect,” Packworks says, explaining the reason why even in times of distress, Filipinos set aside a portion of their budget for hygiene.

Another equally fascinating observation, though, is the variation in Filipinos’ purchasing behaviors during these times of distress depending on the type of calamity.

For instance, the sales of the hair care category jumped by more than 50 percent during the earthquake in Abra and the eruption of the Taal Volcano. This was in stark contrast to when Typhoon Odette hit Leyte, where they instead noted a 50 percent to 60 percent increase spending for food, particularly on noodles and cooking essentials.

Still, Packworks notes a constant in all of these.

“Residents at the epicenter opt to buy their immediate necessities from a nearby sari-sari store rather than go to big supermarkets,” Packworks’ head of data Andres Montiel says, highlighting the importance of gathering data from their business intelligence platform, Sari IQ.

“The analysis on the sari-sari stores becomes more valuable to track what items are deemed to be essential upon the occurrence of such natural disasters. This can be helpful in demand planning and product seasonality on the brand principal’s end,” Montiel says further.