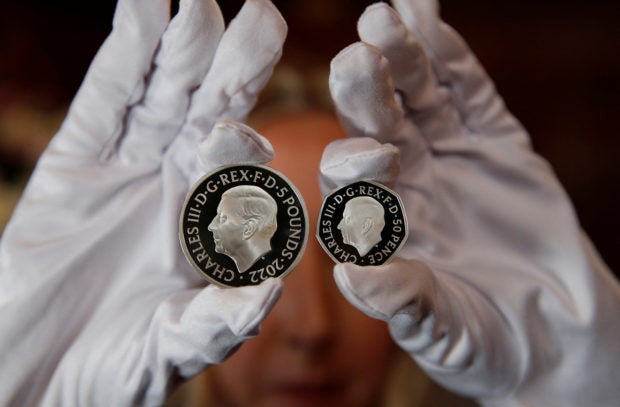 The official coin effigy of Britain’s King Charles III is seen on a £5 crown and 50 pence coin, unveiled by The Royal Mint, in London, Britain, September 29, 2022. REUTERS/Peter Nicholls

LONDON  – The first British coins to feature the image of King Charles have been unveiled by the Royal Mint, with the portrait of the new monarch facing the opposite direction to his late mother Queen Elizabeth in keeping with tradition.

The new image will appear on 50 pence ($0.55) coins, which will begin circulating in the coming months, and also on a commemorative 5 pound coin which also features two new portraits of Elizabeth on its reverse side. 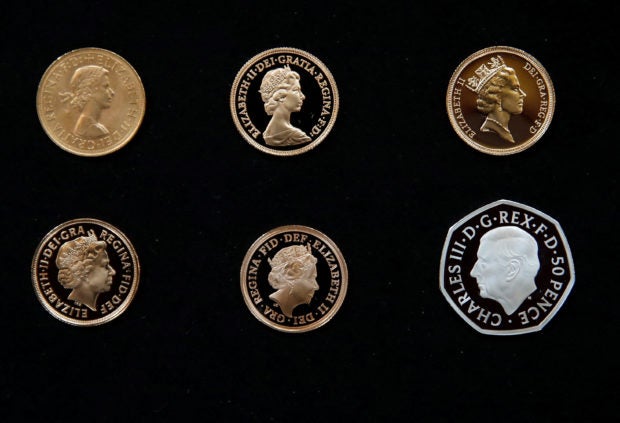 The official coin effigy of Britain’s King Charles III is seen on a 50 pence coin, unveiled by The Royal Mint, alongside five definitive coinage portraits of the late Queen Elizabeth, in London, Britain, September 29, 2022. REUTERS/Peter Nicholls

Since the monarchy was restored in 1660 following the 10-year republic of Oliver Cromwell, it has become traditional for the monarch to face in the opposite direction to their predecessor on coins.

Charles personally approved the official portrait, which shows him facing to the left and was done by British sculptor Martin Jennings. The image is surrounded by a Latin inscription which translates as “King Charles III, by the Grace of God, Defender of the Faith”.

“The portrait was sculpted from a photograph of the King and was inspired by the iconic effigies that have graced Britain’s coins over the centuries,” Jennings said.

“It is the smallest work I have created, but it is humbling to know it will be seen and held by people around the world for centuries to come.”

Queen Elizabeth died on Sept. 8 aged 96 after 70 years on the throne. Some 27 billion coins with her image are in circulation and will remain legal tender as they are gradually phased out over time.

“As we move from the Elizabethan to the Carolean era it represents the biggest change to Britain’s coins in decades and the first time that many people will have seen a different effigy,” said Kevin Clancy, director of The Royal Mint Museum.