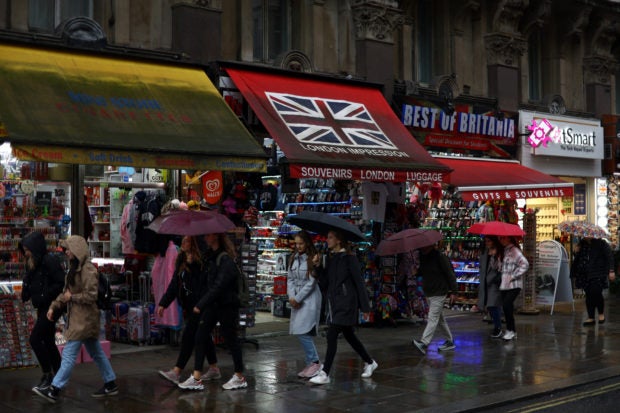 LONDON -The Bank of England sought to quell a fire-storm in the British bond market, saying on Wednesday it would buy as much government debt as needed to restore financial stability after chaos triggered by the new government’s fiscal policy.

Having failed to cool the sell-off with verbal interventions over the previous two days, the BoE announced an emergency move that it said would prevent the turmoil in markets from spreading through the country and seizing up credit flows.

“Were dysfunction in this market to continue or worsen, there would be a material risk to UK financial stability,” the central bank said in a statement that immediately eased pressures on soaring British government bond yields.

The Treasury said it would fully indemnify the operations.

The BoE said it was keeping its goal to reduce its 838 billion pounds ($892 billion) of gilt holdings by 80 billion pounds over the next year, but would postpone the start of sales – due to begin next week – because of the market conditions.

Earlier the International Monetary Fund and ratings agency Moody’s had ramped up pressure on Britain to reverse its new strategy that was set out by new Finance Minister Kwasi Kwarteng on Friday in a move that he said would ignite economic growth.

The rare intervention about a G7 country from the IMF, the global lender of last resort, underscored the severity of the situation facing Britain, with the value of the pound and British bonds collapsing since Friday.

The Bank of England said on Monday it would not hesitate to raise interest rates and was monitoring markets “very closely”. On Tuesday its Chief Economist Huw Pill said the central bank was likely to deliver a “significant” rate increase when it meets next in November.

Despite those comments, the market had remained in turmoil.

Earlier on Wednesday 30-year British government bond yields rose above 5 percent for the first time since 2002. Following the BoE statement, 30-year yields dropped more than 50 basis points on the day.

The latest crisis to hit the British state was triggered by Kwarteng’s plans for deep tax cuts and deregulation to snap the economy out of a long period of stagnation, seen as a return to Thatcherite and Reaganomics doctrines of the 1980s.

With the cost of British borrowing soaring, mortgage lenders pulled hundreds of products and anecdotal reports said people were struggling to get through to lenders to either complete or change mortgage deals.

That would mark a major shock in a country where rising house prices have for years conveyed a sense of overall affluence, and where home buyers have got used to more than a decade of rock-bottom interest rates.

The IMF said the proposals, which sent the pound to an all-time low of $1.0327 on Monday, would add to a crisis of credibility after the government cut taxes and hiked borrowing just as the Bank of England lifts interest rates to tackle surging inflation.

“Given elevated inflation pressures in many countries, including the UK, we do not recommend large and untargeted fiscal packages at this juncture, as it is important that fiscal policy does not work at cross purposes to monetary policy,” an IMF spokesperson said.

Jim Reid, research strategist at Deutsche Bank, described the “rebuke” as “quite scathing”.

The IMF holds symbolic importance in British politics: its bailout in 1976 following a balance-of-payments crisis forced huge spending cuts and has long been regarded as a humiliating low point in the country’s modern economic history.

The crisis in Britain is also being watched around the world, with Spain’s socialist economy minister Nadia Calvino using it to attack her conservative opposition.

“We are all capable of seeing how it is leading the country not adrift, but into disaster,” she said. “An irresponsible, destructive fiscal policy.”

Kwarteng, an economic historian who was business minister for two years, has responded to the criticism by insisting that tax cuts for the wealthy alongside support for energy prices are the only way to reignite economic growth.

The IMF said his fiscal plan on Nov. 23 would provide an “early opportunity for the UK government to consider ways to provide support that is more targeted and reevaluate the tax measures, especially those that benefit high-income earners”.

“We are focused on growing the economy to raise living standards for everyone,” a spokesperson said.

With anxiety growing in the financial sector and among lawmakers in the governing Conservative Party, Kwarteng has spoken to bosses in the banking, insurance and financial sectors and will meet with more banking bosses on Wednesday.

In his remarks on Tuesday, BoE Chief Economist Pill said financial market upheaval would have a big impact on the economy and would be factored into the Bank’s next forecasts.

“It is hard not to draw the conclusion that this will require a significant monetary policy response,” Pill told the CEPR Barclays Monetary Policy Forum. ($1 = 0.9330 pounds)

Read Next
French grid operator to return 1B euros to clients
EDITORS' PICK
House energy committee chair Arroyo bats for cheap electricity
Lawmakers eyeing more changes in Maharlika plan
Shop smarter with vivo’s big 12.12 holiday deals
How not to retire as an ex-president
Hidilyn Diaz wins only gold missing from her collection
The vivo Y02 is now available in the Philippines for only PHP 5,299
MOST READ
Jovit Baldivino, ‘Pilipinas Got Talent’ winner, dies at 29
Andi Eigenmann, family in Manila for a quick visit; Ellie dines with grandma Jaclyn Jose
LPA enters PAR, to likely strengthen into tropical depression in coming days – Pagasa
Lawmakers eyeing more changes in Maharlika plan
Don't miss out on the latest news and information.