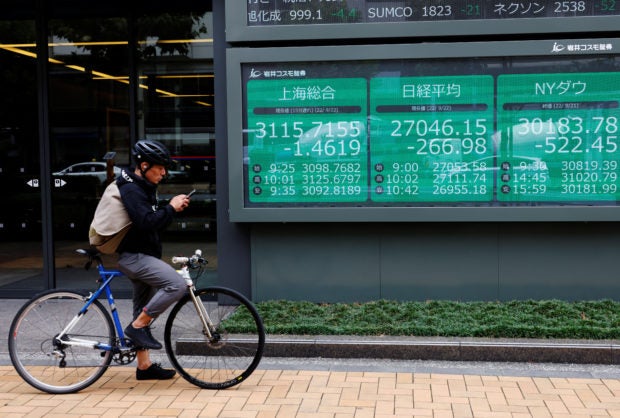 A man on a bicycle stands in front of an electronic board showing Shanghai stock index, Nikkei share price index and Dow Jones Industrial Average outside a brokerage in Tokyo, Japan September 22, 2022. REUTERS/Kim Kyung-Hoon/File photo

SYDNEY  – Asian share markets slid on Wednesday as surging borrowing costs fed fears of a global recession, spooking investors into the arms of the safe-haven dollar and driving the Chinese yuan to record lows.

MSCI’s broadest index of Asia-Pacific shares outside Japan fell 1.7 percent to its lowest since April 2020 as selling swept across emerging markets.

“It is now clear that central banks in advanced economies will make the current tightening cycle the most aggressive in three decades,” said Jennifer McKeown, head of global economics at Capital Economics. “While this may be necessary to tame inflation, it will come at a significant economic cost.”

Shaking investor confidence has been the collapse in sterling and UK bond prices, which could force some fund managers to sell other assets to cover resulting losses.

Adding to the risk of yet higher interest rates, the chief economist at the Bank of England said the tax cuts would likely require a “significant policy response”.

Moody’s on Tuesday warned the UK government that large unfunded tax cuts were “credit negative” and could undermine the government’s fiscal credibility.

George Saravelos, global head of FX strategy at Deutsche Bank, said investors now wanted more to finance the country’s deficits, including a 200-basis-point rate hike by November and a terminal rate up at 6%.

“This is the level of risk premium that the market now demands to stabilize the currency,” said Saravelos. “If this isn’t delivered, it risks further currency weakening, further imported inflation, and further tightening, a vicious cycle.”

Yields on British 10-year gilts have risen a staggering 119 basis points in just four sessions to reach 4.5 percent, the sharpest such move since at least 1979. [GBP/]

The safe-haven dollar has been a major beneficiary from the rout in sterling, rising to a fresh 20-year peak of 114.520 against a basket of currencies.

The dollar edged back up to 144.74 yen, testing the resolve of the Japanese authorities to protect the 145.00 level after last week’s intervention.

The euro slipped anew to $0.9552 and back toward last week’s two-decade low of $0.9528. The dollar also touched a record high on the Chinese yuan at 7.2088, having risen for eight straight sessions.

The mounting pressure on emerging market currencies from the dollar’s rise is in turn adding to risks that those countries will have to further lift interest rates and undermine growth.

The ascent of the dollar and bond yields has also been a drag for gold, which was hovering at $1,624 an ounce after hitting lows not seen since April 2020.