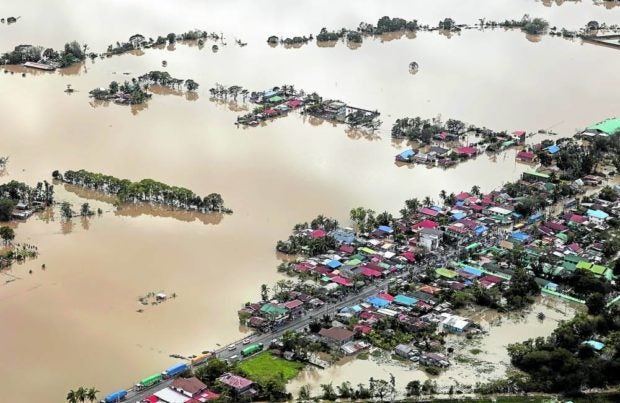 Market analysts and investors are bracing for agricultural damage assessment reports in the wake of Typhoon “Karding” (international name: Noru) on fears these would stoke higher inflation toward the end of the year.

“We are all hoping agricultural and infrastructure damage is kept to a minimum. It seems the administration prepared early in terms of alerting [the public],” Luis Gerardo Limlingan, head of sales at stock brokerage house Regina Capital Development, told the Inquirer.

Financial markets, including trading at the stock exchange, were suspended on Monday due to the powerful storm. Based on initial estimates from the Department of Agriculture, the value of damage to rice, corn and other crops reached over P140 million.

“Super Typhoon Karding may lead to some agricultural damage in hard-hit areas/provinces in Northern Luzon and could lead to higher prices of food/agricultural products and, in turn, may lead to some pick-up in overall inflation,” Michael Ricafort, chief economist at the Rizal Commercial Banking Corp., told the Inquirer.

While such a weather disturbance was typical during the so called typhoon season, Ricafort said the damage could raise inflation expectations as central banks around the world deploy aggressive interest rate hikes to combat consumer price increases.

Ricarfort said they were watching for “large agricultural damage” in major rice, corn, vegetable and agricultural/food-producing provinces in Central and Northern Luzon.

The benchmark Philippine Stock Exchange Index plunged 4.42 percent to 6,259.54 last week after the Bangko Sentral ng Pilipinas (BSP) and US Federal Reserve raised rates anew to tame inflation. The Philippine peso continued its slide against the greenback to touch a new low of P58.50 on Friday.

Bank of the Philippine Islands expects the peso to depreciate further in the medium term as more imports would be needed to sustain postpandemic economic recovery.

“Dollar demand may pick up and keep the exchange rate above the 56:$1 level. Meanwhile, the possibility of tighter dollar supply may contribute further to peso depreciation. The Federal Reserve is expected to continue hiking aggressively this year,” BPI said in a note to investors last week.

The BSP may continue to hike rates during its remaining two meetings this year to as much as 5.25 percent, according to BPI.

Last week, the BSP raised the policy rate by 50 basis points to 4.25 percent.

BPI said projections were partly based on a “conservative scenario” that inflation would peak at 7 percent in October and stay above 6.5 percent for the rest of 2022 for a full-year average of 5.5 percent.

“Despite the recent slowdown in inflation, we continue to see upside risks that could push inflation higher in the coming months,” BPI said. INQ