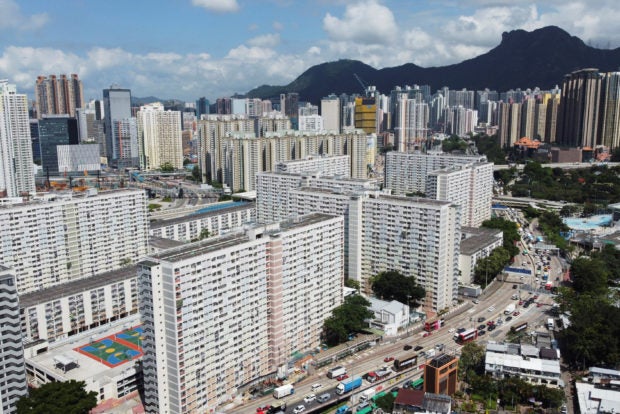 An aerial view shows Choi Hung public housing estate and other residential buildings with the Lion Rock peak in the background, in Hong Kong, China. Picture taken June 3, 2021 with a drone. REUTERS/Joyce Zhou

HONG KONG  – When Stephanie Cheung bought a small, two-bedroom apartment for HK$7.7 million ($981,041) as an investment in April 2021, she booked a 6-percent gain by the summer as Hong Kong’s property market boomed to historical highs.

The price surge was driven in part by optimism that Hong Kong’s borders would reopen after some of the world’s most stringent COVID-19 measures over the past two-and-a half years.

Today, none of that has materialized.

The price of Cheung’s 450 -square foot flat has dropped 6 percent, and the rental income of HK$16,300 is no longer enough to cover mortgage repayments after monthly interest increased by HK$2,400 a few months ago.

“I made the purchase hoping to reserve capital, but now I just wanted to use the shortest time and the smallest loss to sell this apartment,” said Cheung, 40, who lives in a bigger rented apartment with her family.

Cheung’s is not an isolated case as rising mortgage costs and a bleak economic outlook have deepened pessimism among homeowners.

That poses a significant policy headache for the city’s new leader, John Lee, who must balance the needs of different sectors of society. Lee delivers his first Policy Address in October.

“John Lee needs to keep property prices controlled for the grassroots and young people, while he can’t afford to let prices crash because it would jeopardize the wealth of the middle-class,” said realtor Hong Kong Property Services chief operations officer Dave Ma.

Home prices in Hong Kong, the world’s most unaffordable market by income ratio to house values, are expected to drop around 10 percent this year, the first fall since 2008.

Cheung is now set to book an even bigger loss, after some banks on Thursday raised their interest rate by 12.5 basis points, the first rise in four years.

Hong Kong homebuyers have enjoyed years of ultra-low rates and many mortgage plans are linked to the floating interbank rates, which largely stayed below 1 percent in 2021, and during 2009-2016.

As interbank rates spiked to a more than 28-month high in August, the effective mortgage rate has risen to around 2.6 percent from slightly over 1 percent at the beginning of this year.

Interest rates in Hong Kong tend to move in lockstep with U.S. rates, as its currency is pegged to the greenback, putting upward pressure on interbank and mortgage rates.

Home prices in the financial city dropped 4.5 percent in the first seven months from December, while transaction volumes in the first nine months slid 40 percent year-on-year.

Property agents said prices had dropped more than 7 prices so far this year to levels not seen since the third quarter of 2018.

“The gains over the past four years have been wiped out in four months,” said realtor Ma.

Many sellers are those leaving Hong Kong for good or residents forced to cash in to help struggling businesses.

Developers are also cutting prices, with some selling new projects at discounts of up to 20 percent.

Ma said the market could stabilize in the near term if the government lifts travel restrictions with mainland China and overseas, and relaxes stamp duty imposed on second-home purchases and foreign buyers.

Momo Chan, 35, a civil servant who bought a home last April before getting married, also said reopening borders is crucial to support the housing market.

“I had expected interest rates to rise and the market would not keep going up, but I thought it would be stable, not a big fall like this in the last few months,” Chan said.