A quadrillion reasons the Bank of Japan should fret about Fed 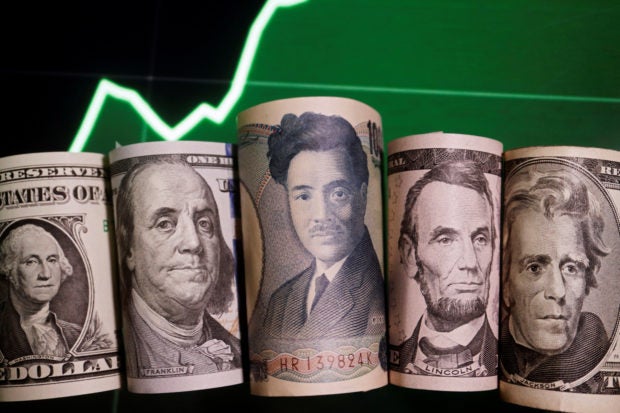 SINGAPORE  – A quadrillion yen is lying idle with Japanese households, ready to be shipped overseas when yields abroad turn more attractive, and that moment could arrive as soon as this week.

Later on Wednesday, the Federal Reserve will be raising rates again and by as much as a full percentage point. The following day, the Bank of Japan is certain to cement its standing as the lone global dove in developed markets by sticking to its negative rates.

The difference in yields between the two markets will hit 300 basis points (bps): an inflection point that analysts say will prompt Mrs Watanabe, a moniker for the famed Japanese retail trader, to ditch the yen and move money out.

“In terms of pure FX carry, the dollar will soon provide 3 percent, yen is still 0 percent, so that’s a big difference,” says Shusuke Yamada, chief forex and rates strategist at Bank of America in Tokyo. Those kind of yields are incentive for both institutional and retail investors to buy U.S. dollars and hold them, he says.

“Japanese households have a thousand trillion in yen deposits. I don’t think it’s going to move 1 percent a year, but even 0.1 percent is already one trillion, so even a small portion could have a meaningful impact. There is that potential,” says Yamada.

The blow to the already battered yen, that’s down 20 percent versus the dollar this year, should be cause for concern for the Bank of Japan.

Yield-seeking Japanese households have been notable absentees from global currency markets during the pandemic years as central banks pushed rates towards zero, squishing spreads between currencies and killing the pervasive yen-funded “carry” trade.

But household savings have been building up in the world’s largest creditor nation. As of June, households had 1,102 trillion yen ($7.7 trillion) in cash and deposits, while private non-financial companies had 325 trillion yen.

“There is a risk of what I call capital flight by Japanese households,” said Tohru Sasaki, head of Japan markets research at J.P. Morgan Securities in Tokyo.

“We have been talking about that for a long time – actually more than a decade – but it never happened. But I think the current situation is really different.

“The generation is shifting, technology is improving, and Japan’s situation is getting worse, so the possibility is getting higher of seeing a kind of capital flight.”

Citi’s quant strategist Alex Saunders says carry trades in major currencies hadn’t worked since 2008 as all rates converged to zero, and while they had revived this year, he hadn’t seen much of that happening in the yen.

That could be changing. Sasaki points to the more rooted feeling among Japanese that they have been gradually losing purchasing power with such a weak currency, but also to how easy it has become even for the elderly to buy foreign currencies with a smartphone.

He also highlighted recent developments such as the swift oil-driven widening in Japan’s trade balance to a record deficit, and the yen’s unprecedented weakness in real terms.

“That’s why I’m getting a little bit scared watching this. This time could be different … so it’s dangerous.”

At 300 bps, the “carry” on dollars funded by yen approaches levels last seen in the 2005-2007 bout of frenzied overseas investment by Japanese retail traders, and before that in 1996-1998. Anything less wouldn’t compensate for the risks, although a weakening yen is a bonus.

In January 2006, when spreads between U.S. and Japan were at their widest at roughly 440 bps, Japanese households had 1,631 trillion yen of assets. By June, that had shrunk by 22.5 trillion yen.

“Even if the FX rate doesn’t change, if you have this kind of yield spread, you’re going to reap a benefit,” said Takuya Kanda, head of the research department at Gaitame.com Research Institute, which serves mainly retail investors.

“So this week particularly, when the BOJ looks set to keep interest rates at extremely low levels, and really it’s only Japan now that still has negative interest rates, that is a very conducive environment for money to flow overseas.”

In a survey of Gaitame.com clients on Aug. 23, about 60 percent said dollar-yen will continue to climb, and many forecast a rise to 145, he said. On Wednesday, it was just off 144.

That makes it imperative the BOJ tries to stamp out speculation the yen is a one-way downhill bet, which it has with statements and monitoring of yen levels.

“The Bank of Japan is trying to change the conversation. People are saying 145 is the line in the sand. I don’t believe that,” said Wakabayashi.

“I think 150 is the line. I think 145 is the trigger that we go from stage 2, which is the official comments, to stage 3, which is the severe warnings.”