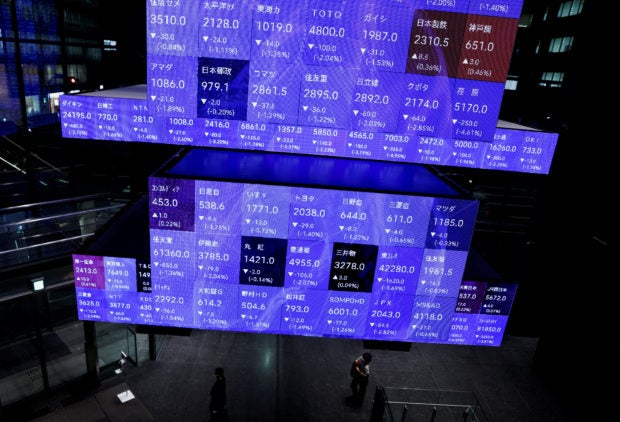 TOKYO  – Stocks in Asia sank and bond yields were elevated on Wednesday, as investors braced for another aggressive interest rate hike from the U.S. Federal Reserve later in the day.

That follows a sell-off on Wall Street overnight that knocked 1.13 percent off the S&P 500, although futures pointed to a slightly higher open on Wednesday.

The Fed headlines a week in which more than a dozen central banks announce policy decisions, including the Bank of Japan and Bank of England on Thursday.

Sweden’s Riksbank surprised markets overnight with a full percentage-point hike, and warned of more to come over the next six months.

Despite that, bets for Fed tightening stayed stable.

Markets are pricing in an 81 percent chance of another 75-basis-point increase, and see a 19 percent probability of a full percentage point rise.

The two-year U.S. Treasury yield hit an almost 15-year high at 3.992 percent on Tuesday, and remained elevated at 3.9516 percent in Tokyo trading, while the 10-year Treasury yield touched its highest in over a decade.

Markets are “seemingly well positioned for a 75bps hike alongside a hawkish update” from the Fed, Taylor Nugent, a markets economist at National Australia Bank in Sydney, wrote in a client note.

“The post meeting commentary and the updated dots will be key,” said Nugent, adding that the NAB was looking for a policy rate of “something like 4 percent” at the end of this year with no rate cuts expected until 2024.

The U.S. dollar index, which measures the currency against six major peers, edged a little higher to 110.22, grinding back toward this month’s 20-year high of 110.79.

The greenback was little changed at 143.64 yen, after twice trying 145 this month, a level last seen 24 years ago.

This week, the BOJ is set to cement its position as the lone dove among the central banks of advanced economies by sticking to its ultra-accomodative policy that pins the 10-year Japanese government bond yield near 0 percent.

The Bank offered to buy 250 billion yen of bonds in an unscheduled operation on Wednesday to keep yields in check.

Markets are split on whether the BOE will opt for a 50- or a 75-basis-point hike on Thursday.

Meanwhile, crude oil continued its decline amid worries that aggressive tightening by the Fed and other central banks would crimp growth and curb demand.

U.S. West Texas Intermediate crude was at $83.74 a barrel, down 20 cents. The October delivery contract expired down $1.28 on Tuesday while the more active November contract lost $1.42.