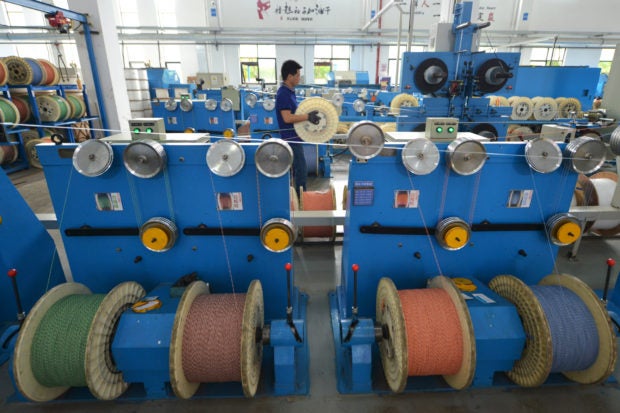 BEIJING  – China’s economy showed surprising resilience in August, with faster-than-expected growth in factory output and retail sales shoring up the recovery from the crippling effects of COVID curbs, heatwaves and a deepening property slump.

The better-than-expected figures show the world’s second-largest economy is gaining some steam, after narrowly escaping a contraction in the June quarter and lifting recovery prospects slightly for the rest of the year.

Industrial output grew 4.2 percent in August from a year earlier, the fastest pace since March, according to the National Bureau of Statistics (NBS). The figure beat a 3.8 percent increase expected by analysts in a Reuters poll and the 3.8 percent expansion in July.

Retail sales rose 5.4 percent from a year ago, beating forecasts for 3.5 percent growth and the 2.7 percent gain in July and hitting the fastest pace since February.

The upbeat set of data lifts some of the gloom hanging over the sluggish recovery, which had been clouded by weak trade data and slow credit growth.

Fixed asset investment grew 5.8 percent in the first eight months of 2022 from the same period a year earlier, above a forecast 5.5 percent rise and up from January-July’s growth of 5.7 percent.

However, property investment in January-August fell 7.4 percent year-on-year, extending a 6.4 percent decline in January-July and raising pressure on the already challenged sector.

Amid weak consumer and business confidence, companies are wary of expanding and hiring more workers. The nationwide survey-based jobless rate eased slightly to 5.3 percent in August from 5.4 percent in July. Youth unemployment stayed high at 18.7 percent, after reaching a record 19.9 percent in July.

Policymakers have announced over 50 policy measures since late May to bolster the economy and stressed this quarter was a critical time for policy action.

Analysts expect more disruptions from tighter COVID-19 controls in September before the ruling Communist Party’s Congress that starts Oct. 16, where President Xi Jinping is poised to break with precedent and secure a third leadership term.

A new leadership team would inherit a range of challenges, including questions on how to unwind what many see as an unsustainable zero-COVID policy to a property crisis and rising tensions with Washington.