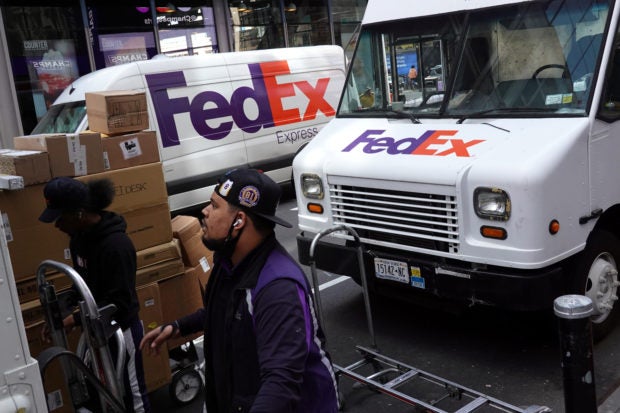 FedEx Corp said on Thursday its fiscal first-quarter results were hit by global volume softness that accelerated at the end of the period, and withdrew its financial forecast as it expects business conditions to worsen in the second quarter.

The warning, which pushed FedEx shares down over 15 percent in after-hours trading, lands as consumers around the world are grappling with higher costs for necessities like food, fuel and shelter at the same time as they are shifting spending away from goods and back to restaurants, travel and other pre-pandemic activities.

The World Bank earlier on Thursday said the world’s three largest economies – the United States, China, and the euro area – have been slowing sharply, and even a “moderate hit to the global economy over the next year could tip it into recession.”

FedEx was reaping higher profits from rising shipping prices as recently as in the quarter ended May 31, but has now withdrawn the financial forecasts it made for the fiscal year 2023 on June 23, less than three months ago.

The company, considered a bellwether of trade and demand for consumer goods, said market weakness accelerated towards the end of its fiscal first quarter, and it has been particularly challenging in Asia. It also faced service challenges in Europe.

FedEx expects to report revenue of $23.2 billion for the first quarter, missing analysts’ expectations of $23.59 billion, according to Refinitiv IBES. Adjusted earnings are expected to be $3.44 per share, well below estimates of $5.14.

The wide gulf between FedEx‘s performance and Wall Street expectations comes after analysts had already tempered estimates for the quarter.

“We are estimating a slightly worse 1FQ23 for FedEx than the consensus forecast. Consensus estimates for revenue and EPS have declined over the past month, coming towards our level. FedEx‘s shares have fallen ~10 percent since their 4FQ22 earnings call in June,” said Cowen analyst Helane Becker.

Hoping to fight the market weakness, FedEx implemented a string of cost-cutting measures, but “the impact of cost actions lagged volume declines, and operating expenses remained high relative to demand,” it said on Thursday.

FedEx has reduced flights, consolidated some operations, deferred hiring, canceled some projects and closed more than 90 ‘FedEx Office’ locations as part of cost cuts, it said.