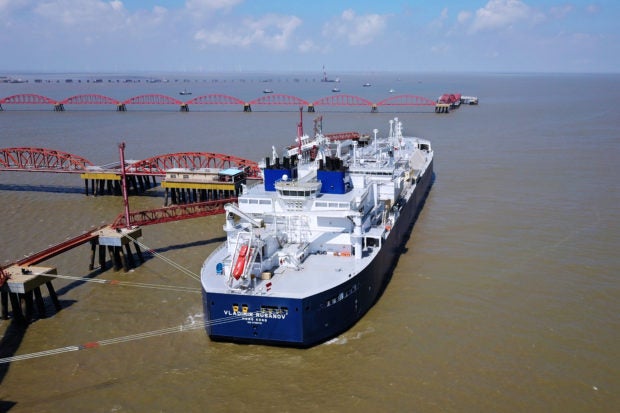 SINGAPORE  – China is buying more and less expensive energy supplies from Russia this year, reaping the benefits of a plunge in European purchases just when Beijing needs it most as the Ukraine crisis pushes Moscow in search of alternative markets.

The growing cooperation, to be further deepened with Chinese President Xi Jinping’s meeting with Russia’s Vladimir Putin in Uzbekistan on Thursday, is a boon for both countries.

China has gained access to cheaper energy while Russia is able to offset losses from the European Union and other allies scaling back on purchases of Russian exports due to sanctions over its invasion of Ukraine. Moscow calls it a special military operation.

Closer Chinese-Russian ties have also promoted the use of their yuan and ruble currencies in commodities trade, lessening reliance on the U.S. dollar.

China, the world’s largest energy consumer and top buyer of crude oil, liquefied natural gas and coal, has imported 17 percent more Russian crude between April and July from the same period a year ago.

It has also bought over 50 percent more LNG and 6 percent more coal from Russia during the same period while electricity imports from Russia, mainly via a cross-broader transmission line connecting northeast China and Russia’s Far East, soared by 39 percent.

China‘s oil, gas, coal and electricity purchases from Russia amount to $43.68 billion so far this year.

Cheaper Russian energy supplies are helping to dampen inflation in China, where the economy narrowly avoided contracting in the second quarter amid COVID-19 lockdowns.

“The upcoming meeting between Xi and Putin will likely fortify China‘s ties with Russia in energy trade for mutual benefit, particularly at a time when Russia (is) grappling with intensified western sanctions while China is in need of low-cost energy to shore up its sagging economy tarnished by COVID lockdowns,” said Zhuwei Wang, manager, Asia Oil Analytics, S&P Global Commodity Insights.

Russia became China‘s top crude supplier from May to July, accounting for 19 percent of China‘s imports, versus 15 percent in the same period of 2021, Chinese customs data showed.

Moscow’s share could grow to more than 20 percent this year, Dutch bank ING said in August.

China saved about $3 billion in buying Russian oil versus other imports between April and July, according to Reuters calculation based on customs data. On average, China paid about $708 per ton for Russian crude while the value of imports from the rest of countries was $816 per ton.

For LNG, China‘s imports from Russia rose 26 percent in the first seven months from the same period a year earlier while exports jumped to 66,798 tons in July, the highest since 2019, on re-exports to Europe and Japan, the data showed.

“China is taking advantage of the disrupted trade flows, including by buying discounted Russian oil and LNG cargoes, while swapping out alternative volumes back into Europe at higher prices, delivering a profitable trade,” said Saul Kavonic, head of Integrated Energy and Resources Research at Credit Suisse.

China also has long-term incentives for Russian supply as it strives to meet new carbon emissions targets and boosts gas consumption. That prompted a February deal for a new pipeline from Russia to start in the next two to three years.

China‘s coal imports from Russia jumped to their highest in at least five years in July, as it bought discounted coal while Europe shunned Russian cargoes ahead of a ban that came into force on Aug. 11.

Russian thermal coal with a heating value of 5,500 kilocalories (kcal) traded around $150 a tonne on a cost-and-freight basis in late July, while coal of the same quality at Australia’s Newcastle port was assessed at more than $210 a ton on a free-on-board (FOB) basis.

Though Russian supplies meet only about 1 percent of Chinese needs, some traders expect more Russian coal to arrive in the fourth quarter when utilities build stocks for the winter heating season.

Analysts said that while the gains for China are clear, Russia remains more reliant on the trade than China.

“However the war is resolved, it is apparent that Russia can no longer rely on its major energy export markets in Europe for the foreseeable future, and the redirection of its energy and commodity exports towards the East will gather pace,” Tilak Doshi, managing director of Doshi Consulting, said.