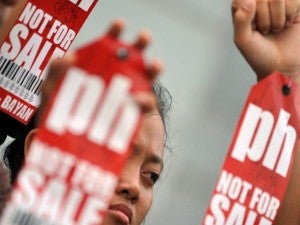 Activists hold a protest outside a hotel where Philippine President Benigno Aquino is attending a business forum entitled "Infrastructure Philippines 2010: Investing and Financing in Public-Private Partnership Projects" in Manila on November 18, 2010. Because of low public spending, among others, the World Bank has again lowered its growth forecast for the Philippines for 2011 to 3.7 percent from its previous forecasts of 4.2, 4.5 and 5 percent. AFP PHOTO/NOEL CELIS

The World Bank has again lowered its growth forecast for the Philippines for 2011 and 2012, saying low public spending and weak global demand weighed down the national output in the first three quarters of the year.

In its Philippines Quarterly Update (PQU) released yesterday, the World Bank said that Philippine economic growth in terms of gross domestic product (GDP) might hit a “moderate” 3.7 percent in 2011. Growth in 2012 is projected to improve to 4.2 percent in line with regional forecasts. Higher 2012 growth hinges on improvement in exports, acceleration of public-private partnership projects and private sector investment and a full recovery of public spending.

In order to grow above 5 percent in the years to come, the World Bank said the Philippines needed reforms to address structural bottlenecks in the economy. This would include measures to raise revenue for higher spending on infrastructure, health, education and social protection as well as simplifying business regulations to encourage entrepreneurship and job creation.

“A stronger structural underpinning would allow the country to deal with shocks more effectively, achieve more inclusive growth and reduce poverty at a faster rate,” said World Bank country economist Karl Kendrick Chua, who led the preparation of the PQU.

Chua said the projection hinged on the successful implementation of the government’s disbursement acceleration program and an acceleration in private consumption and investment, which have begun to grow faster in the last quarter of 2011.

“The government is instituting important measures to improve transparency and accountability in public spending. Once these institutional reforms are in place, spending is expected to fully recover at cost-effective levels with more resolute impact on the country’s growth and development,” Chua said.

The PQU highlights the continuing risks posed by the global economy on the Philippines’ growth prospects.

The external environment, according to the report, has become much weaker in recent months. Japan fell into recession in 2011 due to the effects of the earthquake and tsunami. Growth in the United States was sluggish in the first half. Output in Europe has weakened sharply in the second half and there were fears that the region might go into recession in early 2012.

Growth in East Asia is projected to slow down to 7.7 percent next year from 8.1 percent in 2011. While a number of countries are expected to enact fiscal stimuli to buoy growth, these are likely to be limited given narrower fiscal space.

Nevertheless, the PQU noted that the Philippines was relatively well positioned to weather shocks emanating from the current global turmoil because of its strong economic fundamentals, regulatory reforms and prudent measures instituted following past crises and slowdowns.

The PQU noted that the government has initiated several reform measures for 2012, including raising excise taxes on alcohol and tobacco, pushing for the enactment of the fiscal responsibility and fiscal incentives rationalization bills to plug future leakages in tax revenues and improving equity and efficiency of the tax system.

Ensuring the enactment of these measures would be critical to raise spending in infrastructure and human capital to support medium-term growth prospects, according to the report.

“These reform measures are steps in the right direction. An acceleration of these reforms, in particular raising excise taxes on alcohol and tobacco as proposed by the administration, would help secure the much-needed revenues to increase public spending especially for infrastructure development, health and education that should benefit the poor,” Kanda said.