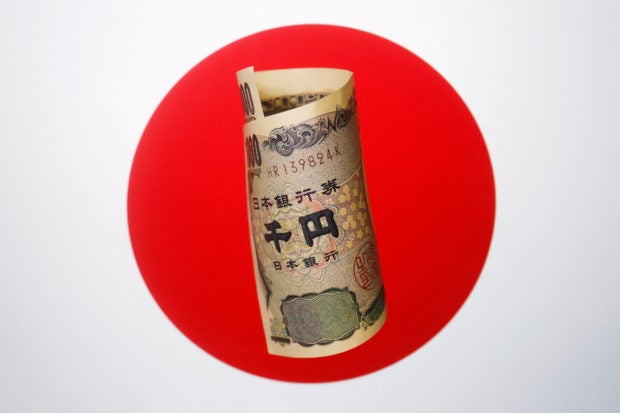 A banknote of Japanese yen is seen in this illustration picture taken June 15, 2022. REUTERS/Florence Lo/Illustration/File Photo

TOKYO  -The yen may be near 24-year lows, but Japan’s central bank is not even close to trying to support it with higher interest rates.

That is the message from three sources familiar with the thinking of the Bank of Japan (BOJ), and it was strongly implied by the country’s top foreign exchange diplomat last week and indeed by central bank chief Haruhiko Kuroda in July.

The government – especially the Ministry of Finance (MOF) – has repeatedly and strongly expressed dissatisfaction with this year’s falls in the yen, which on Sept. 7 dropped as far as 144.990 per dollar, down 30 percent since the end of 2021.

But the central bank is independent and by law obliged to attend to inflation and the state of the economy, not the exchange rate.

Its support for the weak economy with ultra-low interest rates is the main factor behind the yen’s weakness, since other central banks, notably the U.S. Federal Reserve, are briskly tightening monetary policy, making their currencies more attractive as destinations for capital.

The BOJ has no intention of raising interest rates or tweaking its dovish policy guidance to prop up the yen, the sources said.

“The BOJ won’t directly target currency rates in guiding policy,” said one of them. “It looks at yen moves in the context of how they affect the economy and prices.”

Official statements are in fact consistent with that.

The BOJ has joined the finance ministry in warning against sharp falls in the currency. But Kuroda said in July, “It’s hard to believe that just by raising rates somewhat, you can stop the yen’s decline.”

That view is still widely shared in the central bank, the sources said.

When the MOF expresses its displeasure with the yen’s falls, it is said to be jawboning – dropping a hint that it may intervene in the market to support the currency. This is intended to make traders cautious in selling the yen.

Last week’s comments by Masato Kanda, a MOF official who serves as Japan’s top currency diplomat, emphasized the divergence between the government and central bank.

But he declined to comment on BOJ policy and said “the government” – instead of “government and the BOJ” – was ready to use all available tools to battle excessive yen declines.

“Each of us has our own mandate. That’s why I carefully used ‘government’ as the subject at times and ‘government and BOJ’ at other times,” Kanda told reporters.

He was speaking after a meeting between the ministry and central bank.

Japan’s economic weakness gives the BOJ little reason to withdraw the monetary stimulus that is undermining the yen. The central bank is set to maintain ultra-low interest rates and dovish policy guidance at its Sept. 21 and 22 meeting.

As for the currency, the most it can do is to maintain, or perhaps strengthen, a warning it inserted in its policy statement in June. It said then that it would “closely watch financial and currency market developments, as well as the impact on Japan’s economy and prices.”

That leaves possible MOF market intervention as the main concern for investors betting against the yen. Yet even that looks improbable, considering that Tokyo would have difficulty getting the necessary consent from other members of the G7 group of large economies.

But the BOJ’s focus on inflation and the economy does not mean it would never act in response to currency moves, the sources said.

It could feel compelled to respond in the event of a freefall that became so extreme that the economy and price stability were threatened, they said.

That, however, is not the current situation.