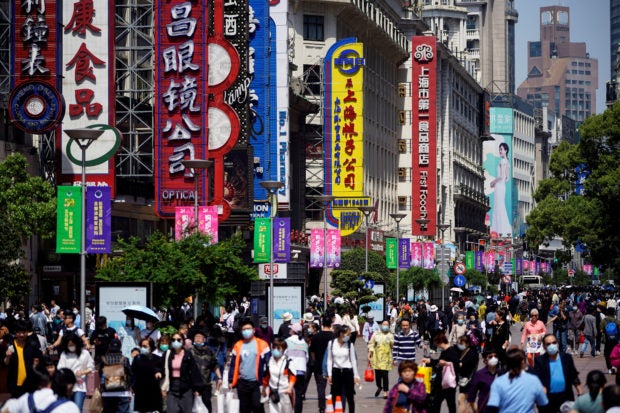 BEIJING  -China’s consumer prices rose at a slower-than-expected pace in August amid heatwaves and COVID-19 flare-ups, while producer inflation eased to the lowest since February 2021, official data showed.

The consumer price index (CPI) increased 2.5 percent year-on-year from a 2.7-percent growth in July, data from the National Bureau of Statistics (NBS) showed on Friday. The reading missed analysts’ median forecast for a 2.8-percent gain in a Reuters poll.

Producer prices rose 2.3 percent year-on-year in August, the slowest pace since February 2021, and slowing from a 4.2-percent rise in July and below a forecast for a 3.1-percent gain in the poll.

While CPI inflation was approaching the government’s target of about 3 percent, it was still lower than the lofty inflation seen in other major economies.

People’s Bank of China (PBoC) warned in August that China faces rising structural inflation pressure and CPI inflation might exceed 3 percent in some months in the second half of the year.

“The potential financial risks (mortgage boycotts and rural bank scandals) may force the PBoC to stay accommodative, with appropriate liquidity to cushion risks,” said Barclays in a research note.

“We think the central bank will prefer to use some low-profile and targeted policy easing tools, including re-lending and re-discount tools, or relying on policy banks to boost lending and support credit growth.”

Hog prices in the world’s top pork producer have surged in recent months, as a reduction in the breeding herd that began last year started to impact output.

So-called core CPI, which strips away volatile food and energy prices, rose 0.8 percent from a year earlier, unchanged from July.

Chinese policymakers this week signaled a renewed sense of urgency to shore up the flagging economy, saying action was critical in the quarter as data points to a further loss of economic momentum.

Read Next
Reward yourself as you grow your tire dealership business
EDITORS' PICK
Bongbong Marcos to slain journalist’s kin: ‘We are ready to help’
House energy committee chair Arroyo bats for cheap electricity
Smart awards ‘Subscribe & Get Lucky’ Raffle Promo winners
10,000 to less than 500: How people are driving the tamaraw to extinction
Score lots of freebies and discounts on vivo 10.10. Sale
Marcos wants to accelerate efforts to build agricultural sector back
MOST READ
34 people killed in mass shooting at daycare center in Thailand
Marcos admin gets high approval ratings in Pulse Asia survey
Senators notice DBM’s ‘Sipsip’ program during budget hearing
Comelec gets 2 new commissioners
Don't miss out on the latest news and information.