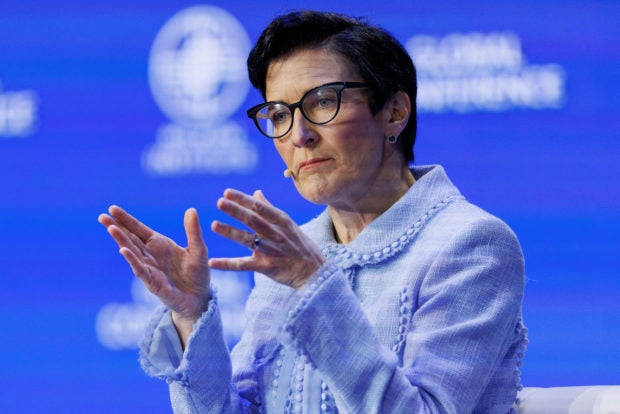 NEW YORK  -In less than two years at the helm of Citigroup Inc, Jane Fraser has unveiled plans to exit Russia in a bid to pare down risky assets and cull consumer businesses in 13 other countries to focus on multinational companies and the wealthy.

Still, analysts and a key investor say while the company is going in the right direction, the first female chief executive officer of a major Wall Street bank faces a monumental turnaround effort ahead.

The foremost task for Fraser is addressing urgent demand from U.S. regulators to overhaul its risk management systems, a problem amplified by a botched transfer of nearly $900 million to lenders of struggling cosmetics firm Revlon two years ago.

She also has to simplify Citigroup’s business structure and exploit its competitive advantages with a core group of institutional and retail clients to boost medium-term returns.

Analysts warn these targets risk depressing earnings in the short-term as the bank ramps up investment spending and are further challenged by the deteriorating economic environment.

But some investors are showing patience with Fraser’s strategy to make the bank nimbler by refocusing on key businesses, like its treasury and wealth-management units, which benefit from the company’s global reach. Fraser has said she wants to win more business from multinational companies that engage in cross-border transactions, while beefing up the company’s business catering to wealthy people.

“We like Jane a lot. We think she is a change agent and laid out a very logical strategy that we’re confident she can achieve over time,” said Joe Pittman, an analyst at activist investor Harris Associates, the sixth-biggest shareholder of Citi, according to Refinitiv data.

“The company is significantly undervalued,” he said.

By one measure of valuation, Citigroup shares trade at 0.5 times price-to-book on a forward 12-month basis, significantly below the banking industry’s average of 1.07 times, according to Refinitiv data. JPMorgan trades at 1.2 and Bank of America trades at 1.04.

Citi declined to comment on its strategic plans beyond pointing to comments made during investor day in March and other investor events.

Fraser inherited a litany of long-standing problems when she took over from Michael Corbat, who ran the bank from 2012 to early 2021. Her job was made even more difficult this year after economic sanctions on Russia prompted Citi, the largest Wall Street bank to have a presence in the country, to wind down its consumer and local commercial business there instead of a sale.

Mike Mayo, banking analyst at Wells Fargo, called Citi’s Russia exit “good riddance” but noted the news was negative on the margins as a buyer would have been better.

Fraser had long been a star at Citigroup before she became CEO. A former partner at consulting firm McKinsey, she joined Citi in 2004 and helped the company to recover from the 2008 financial crisis after it got a $45 billion bailout. Fraser spent years climbing the ranks as an executive, running Citi’s private bank, then its Latin America operations and consumer division.

“Now what you need to do is apply that turnaround knowledge to Citi as a whole,” said Jason Goldberg, an analyst at Barclays. “It’s not going to happen overnight.”

“The capital ratios are rising, the liquidity is like any other bank in the United States right now – they are awash with liquidity. I think bondholders can be patient,” Nerby said.

Patience may be required to address one of the company’s biggest challenges: orders from U.S. banking regulators to overhaul its risk management systems.

In 2020, The Federal Reserve ordered Citi to correct several “longstanding deficiencies” in internal controls, while the Office of the Comptroller of the Currency (OCC) imposed a $400 million fine.

“There are not many banks facing this kind of upheaval,” said a banking expert, who asked not to be identified.

Citi is ramping up spending on technology that it can use to evaluate its risks and prevent future mistakes. Karen Peetz, who joined Citi in 2020, is leading the program. Citigroup submitted its plan to regulators last year laying out how it planned to address the consent orders, the company said in March. It’s refining and carrying out the plan with urgency, Peetz said at the time.

“There’s several things they need to do. These include satisfying the consent orders as those tend to be costly and take time, improving the ROTCE (return on tangible equity), and getting through the divestitures,” said Goldberg at Barclays.

A sputtering economy could pose yet another challenge for Fraser, who has shown willingness to tackle problems head-on.

“When I think about Citi, look, we’re prepared for a variety of scenarios,” said Fraser during the second-quarter earnings call in July. “And what matters for a bank heading into recession? Capital, liquidity, credit quality and reserves. And we feel very good about all four of them.”