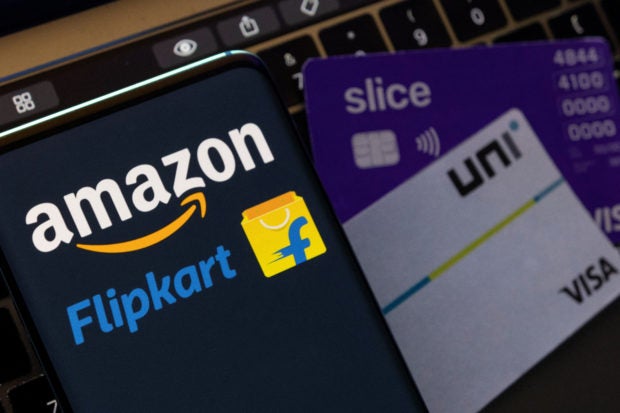 Amazon and Flipkart logos are seen near Slice and Uni credit card mockups in this illustration taken August 25, 2022. REUTERS/Dado Ruvic/Illustration

Citing concerns over high rates and unfair practices, the Reserve Bank of India (RBI) this month said a loan borrower must deal directly with a bank, dealing a blow to prepaid card providers and shopping websites which act as intermediaries and instantly process deferred loan payments.

India’s digital lending market has grown quickly and facilitated $2.2 billion in digital loans in 2021-22, with startups attracting foreign backers and giving traditional banks a run for their money in the credit business.

The new rules have already hit prepaid card offerings of Tiger Global-backed Slice and Accel-backed startup Uni, which have partnered with banks and allowed users to split purchases into interest-free easy repayments, a feature not available with typical credit cards.

Solving “time-sensitive money crunches” made Uni popular: its cards were swiped for $67 million on average monthly, much more than credit card usage of some smaller private and public banks in India.

The RBI has said the new rules were to be implemented immediately, but added that “detailed instructions will be issued separately.”

Still, Uni suspended its card services this week due to the RBI rules, hitting hundreds of thousands of users, while Slice has put new card issuance on hold.

Worries are also rising that the rules will throttle plans of bigger players Amazon.com Inc and Walmart’s Flipkart to expand their popular buy-now-pay-later schemes that have tapped millions of users, three industry sources said.

That’s because currently Amazon and Flipkart facilitate loans for their shoppers. The bank pays the online merchant, while the borrower later makes loan payments to the lender. The new RBI rules, sources say, could impact this route if online merchants can’t receive payments directly.

“It is likely that seamlessness of availing credit by the customer will be severely impacted,” the Internet and Mobile Association of India, a top industry group representing Amazon and Flipkart, said in a draft internal lobbying document crafted in collaboration with consulting group PwC.

The group plans to push the RBI to carve out direct merchant payments as an exception under the new rules.

Flipkart has been bullish on the buy-now-pay-later business, saying in May it doubled its user base for the service to more than 6 million in seven months.

Slice said in a statement it was committed to comply with Indian regulations, which it said were a recognition of the rapidly growing industry. It did not comment on the business challenges.

The RBI, IAMAI and PwC, and none of the other companies responded to Reuters queries.

Among other new rules, the RBI has said fintech firms should recover charges of facilitating a digital loan from their banking partners, not the borrowers. And the firms must also appoint nodal officers and have better checks on user data.

Rahul Sasi, a cybersecurity expert who was on an RBI panel that helped draft the new regulations, told Reuters that while some disruption due to the new rules is inevitable, the ultimate aim is to protect consumers.

“The idea has been to always let the businesses run, it was not about killing the fin-techs,” he said.

Nevertheless, fin-tech firms are worried, and fear more regulations are on the way. Swapnil Bhaskar, head of strategy at Indian digital banking solutions provider “Niyo”, said the rules could lead to industry consolidation and slow down an industry that has grown at a rapid pace.

The disruptions have disappointed some users.

Athul Bhadran, a 28-year-old engineer, said he happily used his Uni prepaid card to manage his budget by splitting his bigger purchases, like the 19,000 rupees ($238) he spent on a washing machine. Now, he can’t.

“I always had the peace of mind if I wanted to spend a big amount,” he said.