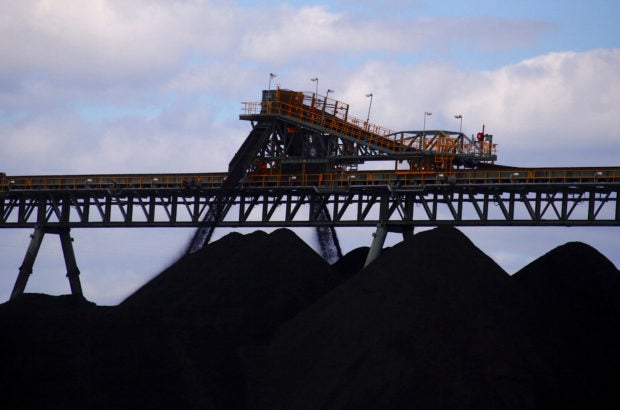 Coal is unloaded onto large piles at the Ulan Coal mines near the central New South Wales rural town of Mudgee in Australia. REUTERS/David Gray/File photo

SYDNEY – Australia’s companies are split, with big miners and airlines expecting higher profits on soaring commodities prices and a rebound from COVID-19, while supermarkets, banks and manufacturers are hurt by inflation and stagnant wages.

Annual business results and profit forecasts reveal a divide in the world’s 13th-biggest economy between companies, largely international, that collect on rising prices and those, largely focusing on the domestic consumer, that are forced to absorb the higher costs.

Australia, the world’s top coal exporter, has benefited from sanctions and freight blockages linked to Russia’s invasion of Ukraine, which have driven up demand – and prices – for coal and other commodities.

Miner BHP Group Ltd, Australia’s biggest company, recorded its highest profit since 2011, while Whitehaven Coal and South32 Ltd reported earnings jumps on Thursday. “Coal prices are at record levels and customers are focused on energy security now more than ever before,” said Whitehaven chief executive Paul Flynn, adding that prices the miner received for a ton of coal more than tripled in a year.

“Supply chain bottlenecks are easing and demand for international travel has exploded as COVID restrictions have been eased or removed,” said Matthew Simpson, senior market analyst at Stone X Financial.

At the same time, though, “eye-watering levels of inflation are forcing central banks to hike interest rates at their most aggressive pace in decades and business sentiment is heading south as consumers get further squeezed.”

The Reserve Bank of Australia has raised interest rates every month since May, with more hikes expected as the central bank tries to curb inflation forecast to peak late in the year at 7.75 percent, about three times the rate of wage growth.

Higher prices and interest rates are hitting consumers and the companies that supply their daily needs.

Number one grocer Woolworths Group, a standout stock during COVID restrictions, said customers were going without staples – like red meat, whose prices have surged as livestock numbers have been ravaged by extreme weather.

Higher shelf prices, along with rate rises, have encouraged “shopping to budgets rather than to items”, Woolworths said. Its shares fell 4 percent.

“There comes a point where you can’t pass it on to customers and you have to just take a low margin,” Woolworths CEO Brad Banducci said on an analyst call.

Discretionary retail is also being hit.

Electronics retailer JB Hi-Fi Ltd said sales rose 10 percent in July, the first month of its financial year, but did not say how that translated to profit, while analysts flagged softening demand.

While higher interest rates hurt consumer-facing businesses, wholesale energy prices, up 141percent since a year ago as the Ukraine war squeezes supply, have darkened the outlook for building materials makers, which also face weaker demand due to a property downturn.