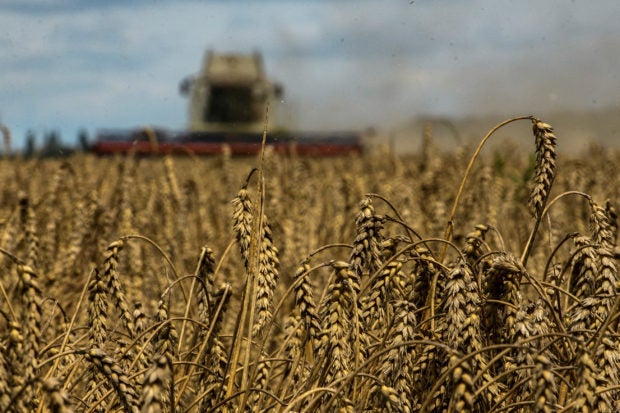 A combine harvests wheat in a field near the village of Zghurivka, amid Russia’s attack on Ukraine, in Kyiv region, Ukraine August 9, 2022. REUTERS/Viacheslav Musiienko

KYIV- Exports of key Ukrainian agricultural commodities have fallen by almost half since the start of the Russian invasion earlier this year compared to the same period in 2021, data from the agriculture ministry showed late on Monday.

Russia began its attack on Ukraine on Feb. 24, calling it a “special military operation”, and as a result of the fighting, Ukrainian seaports were blocked, leaving a vast amount of crops either unharvested or destroyed.

Agricultural exports between Feb. 24 and Aug. 15 this year fell to 10 million tons from around 19.5 million in the same period last year, the ministry data showed.

The 2022 grain harvest in Ukraine is forecast to fall to around 50 million tons from a record 86 million tons in 2021.

The country, whose food production, according to the government, is capable of feeding up to 400 million people, also exported barley, soy beans and oil, sunflower and soybean meals.

At the end of July, three Ukrainian Black Sea ports were unblocked under a deal between Moscow and Kyiv, brokered by the United Nations and Turkey.

But even with the ports opened, Ukraine’s agricultural exports are significantly lower than before the conflict, when Ukraine exported up to 6 million tons of grain a month.

Last week the agriculture ministry said Ukraine’s grain exports in the 2022/23 season up to Aug. 19 are down 51.6 percent from a year earlier at 2.99 million tons.

Grain exports for the 2021/22 season, which ended on June 30, rose 8.5 percent to 48.5 million tons thanks to a large volume of shipments before Russia invaded.