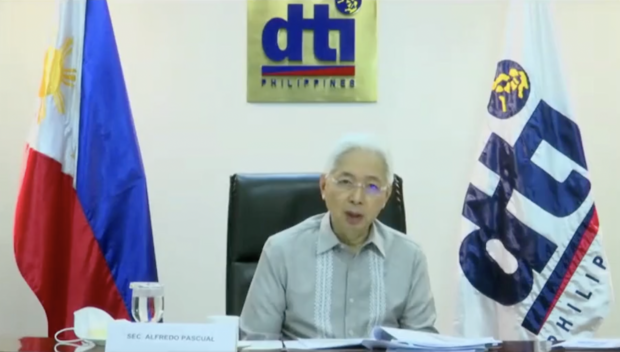 DTI Sec. Alfredo Pascual during the public hearing of the Committee on Trade, Commerce and Entrepreneurship. Screengrab from Senate livestream

During the organizational meeting of the Senate committee on trade, commerce, and entrepreneurship, Pascual said that concurrence to RCEP is one of the considerations of foreign investors.

“It is very important, I would like to emphasize, that the RCEP be ratified or confirmed by the Senate because we’ve always been asked by prospective investors, by foreign chambers about how soon they’ll see the ratification of RCEP,” he said.

“The companies in their respective jurisdictions are asking them (about it)  before they consider investing in the Philippines,” he added.

Pascual issued the remark in response to Senator Pia Cayetano’s query on whether the DTI is considering tax-free importation of certain industry clusters such as health-related enterprises that produce medical equipment in the country.

He said the DTI welcomes any move to facilitate the establishment of enterprises from industry clusters, saying that investors will most likely come from abroad.

This, he said, is where the RCEP ratification will be a factor.

RCEP provides preferential arrangements, including market access, in all participating countries. It will  allow the Philippines, for instance, access to the markets of other member countries for its exports , as well as to raw materials, inputs and equipment for local industries at zero or reduced tariff rates.

According to a report of the Wallace Business Forum, the “very sensitive” agricultural products are excluded from the tariff arrangement. It said the Philippines offered only 33 agricultural tariff lines for further liberalization  and 17 of which were raw materials, eight were inputs and only eight were final produce.

Former Trade Secretary Ramon Lopez was earlier quoted as saying that rice, sugar, swine and poultry meats, garlic, onions, potatoes, cabbage and carrots, among others, were excluded from the tariff arrangement.

Cayetano recalled that the legislative measure on the ratification of the trade agreement had been introduced in the previous Congress.

“I’m not sure if this is the committee on trade or the committee of foreign affairs that handles it but we are always happy to learn more. I recall that we are not able to pass it in the last Congress because there were a lot of concerns from different senators,” the senator said.

President Ferdinand “Bongbong” Marcos Jr. earlier said he has no issue about the Philippines joining the RCEP, only that the agriculture sector should first be strong enough to compete with other countries.

Marcos is the concurrent secretary of the Department of Agriculture, a line agency whose stakeholders have strongly opposed the RCEP ratification for fear of the adverse impact on them of the free trade agreement.

The RCEP is a  trade deal involving the 10-member Asean, China, Japan, South Korea, Australia and New Zealand. Together, these countries account for one-third of the world economy, one-third of global trade and a market of 2.3 billion people. Members include 10 Asean member-countries.

The country’s participation in the agreement was by the Palace in September last year and brought to the Senate for concurrence. However, the 18th Congress was not able to act on it before its adjournment.

Treaties or international agreements entered into by the government require Senate concurrence.

Read Next
Vodafone to sell Hungarian business for $1.8B
EDITORS' PICK
How not to retire as an ex-president
Shop smarter with vivo’s big 12.12 holiday deals
Lawmakers eyeing more changes in Maharlika plan
Hidilyn Diaz wins only gold missing from her collection
House energy committee chair Arroyo bats for cheap electricity
The vivo Y02 is now available in the Philippines for only PHP 5,299
MOST READ
Jovit Baldivino, ‘Pilipinas Got Talent’ winner, dies at 29
LPA enters PAR, to likely strengthen into tropical depression in coming days – Pagasa
Andi Eigenmann, family in Manila for a quick visit; Ellie dines with grandma Jaclyn Jose
11 Filipino imports named to Japan B.League Asian All-Star team
Don't miss out on the latest news and information.