Concepcion: Build ‘Circle of Success’ with industry, labor and MSMEs 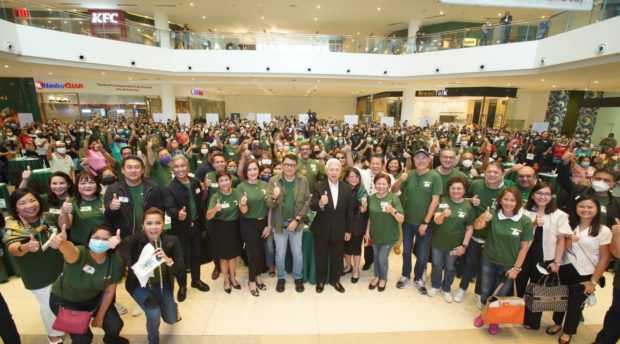 MANILA — MSMEs (micro, small and medium enterprises), industry and labor working together will create a virtuous cycle that in the end will generate more jobs for everyone.

Go Negosyo founder Joey Concepcion put forward this framework as he began his task as the lead of the Jobs group of the Private Sector Advisory Council (PSAC), a group of business leaders that government has asked to advise it on achieving its economic goals.

“Growing MSMEs will help them hire more people which will, in the end, improve consumer spending and increase our country’s GDP. This is the circle of success that is achieved when everyone in the ecosystem grows. No one gets left behind,” said Concepcion. Any effort to help MSMEs, he said, will create the most impact as they generate as much as 63 percent of jobs in the Philippines.

Concepcion said MSMEs figured prominently in discussions with Department of Labor and Employment (DOLE) Secretary Benny Laguesma when they met to align efforts to increase employment for millions of Filipinos. MSMEs were also on the agenda when, last August 17, Concepcion and other members of the PSAC presented to President Ferdinand Marcos Jr. five proposals to create more jobs. The President previously emphasized that there should be a collaboration between the labor department and MSMEs.

“We are trying to find ways on how government and the private sector can collaborate and make the most of the country’s valuable human resource,” said Concepcion. “We are pretty much aligned as far as our recommendations on jobs, skills development, the review of labor laws to create more harmony between labor and industry, and not ‘too much government’ in this sector,” he said.

Concepcion foresees closer cooperation with the Department of Trade and Industry to ensure that the jobs issue can be approached from both the labor and the MSME perspective. ”This is why we welcome the partnership with Sec. Laguesma,” he said, because with government, labor and industry working together, the country can become competitive in the labor market, generate more quality jobs, and maintain industrial peace.

Other priority issues discussed with DOLE were the need to ease pre-employment processes for first-time job seekers, and to update workforce skills so that these are aligned with current and future demand. It was noted that while there are plenty of jobs available, applicants often lack the necessary qualifications or training for these jobs. The need to update labor laws to take into consideration shifts in workforce habits and preferences, as well as the to consider the issue of both the employers and employees in forming policy was also raised.

Concepcion added that with the Technical Education and Skills Development Authority, or Tesda, now back under the DOLE, government and industry can collaborate on programs that elevate training to include skills that are relevant, competitive and up to global standards. Officers from the People Management Association of the Philippines were present in the meeting and proposed an expanded apprenticeship program which will make it possible to adequately train new hires and at the same time address concerns of the employers.

“We also explored with DOLE what we can accomplish together, and looked for new solutions such as providing mentorship for those who want to see how entrepreneurship can be an alternative to employment and at the same time a source of employment for other people,” said Concepcion.

Concepcion also shared that programs related to jobs generation will be included in its soon-to-be-launched Kapatid Angat Lahat Program. “The concept of big companies coming to the aid of MSMEs is not new. Many large Filipino companies are already sharing their technologies and helping SMEs scale up. We need to do more of this.”