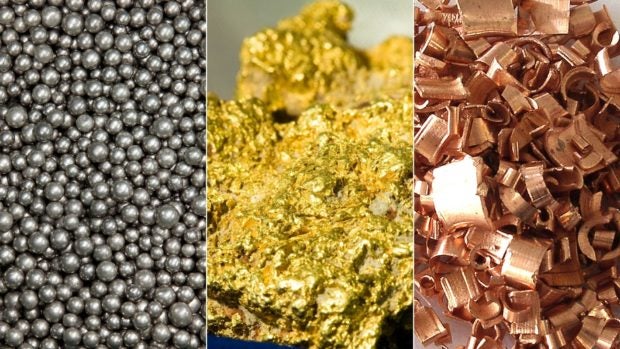 Elevated world market prices pushed up the value of the country’s metallic mineral production in the first six months of the year by a hefty 39.42 percent to P112.66 billion from P80.81 billion last year, according to a report by the Mines and Geosciences Bureau (MGB).

MGB said the “driving force” behind the encouraging performance of the industry “was still the strong metal price of gold, copper and nickel.”

Only silver prices declined in the first semester after dropping by 12 percent to $23.30 per troy ounce from $26.49 per troy ounce.

Nickel ore, together with its nickel products (mixed nickel-cobalt sulfide and scandium oxalate), accounts for 45.55 percent of the total production at P51.32 billion.

Gold came second with P46.44 billion, representing a 41.22- percent share. Copper pitched in P12.84 billion while the shared value of silver, chromite and iron ore, which the MGB said had been expanding recently, reached P2.07 billion.

In terms of production, the volume of nickel direct shipping ore declined by 20 percent to 10,820,750 dry metric tons (DMT). Its production value inched up by 7.30 percent to P24.41 billion.

“Factors seen to have caused lower mine output would be the wet weather condition together with lower demand from our major trading partner China due to their prolonged period of lockdowns,” it said.

MGB said the outlook for the minerals industry “remains optimistic” as the government cited the potential role of the mining industry in the country’s economic growth.

“The mining industry holds the greatest potential to be a key driver in our economic recovery and long-term growth, especially now that world metal prices are high,” Finance Secretary Benjamin Diokno had said. “The Philippines, after all, is one of the world’s most richly endowed countries in terms of mineral resources.”

The MGB reiterated its commitment to approving any proposed mining project as long as it is “technically feasible, environmentally compliant, socially acceptable and financially viable.”