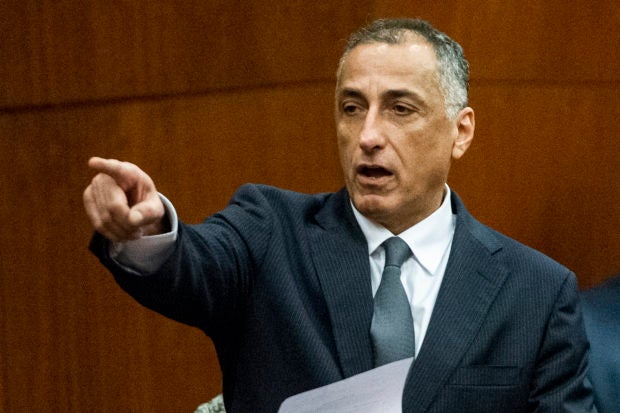 Tarek Amer, Governor of the Central Bank of Egypt, speaks during a press conference in Cairo on Nov. 3, 2016. Photo by KHALED DESOUKI / AFP/File photo

The governor of Egypt’s central bank, Tareq Amer, resigned on Wednesday, state media reported, with the Arab world’s most populous country in the grip of a deepening economic crisis.

President Abdel Fattah al-Sisi accepted the resignation of Amer, who took up his post in 2015 and had been due to stay on until next year, the state-owned newspaper Al-Ahram reported.

Sisi named Amer a presidential adviser but there was no immediate word on who would replace him at the central bank.

He leaves with the Egyptian pound changing hands at 19.1 to the US dollar, its second lowest exchange rate on record, exceeded only during the currency’s brutal devaluation in winter 2016.

Egypt devalued its currency again in March in the face of soaring inflation.

The world’s largest importer of wheat, Egypt has been badly hit by the war between its two main suppliers — Russia and Ukraine — which has sent world prices soaring.

The cost of some foodstuffs has risen by as much as 66 percent, helping push inflation to a headline rate of 15 percent.

Thirty million of Egypt’s 103 million people now live below the poverty line, with as many more living precariously, according to World Bank figures.

Egypt’s hard currency reserves have fallen from $41 billion in February to $33.1 billion now, despite support from close ally Saudi Arabia which deposited five billion dollars in the central bank in late March.

Egyptian authorities are in talks with the International Monetary Fund on a new bailout as the public debt has hit 90 percent of GDP.