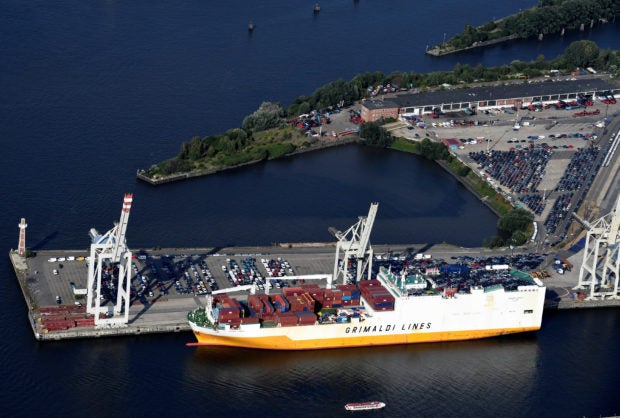 Export cars are loaded on a RoRo ship of Italian Grimaldi Group at a terminal in the port of Hamburg, Germany. REUTERS/Fabian Bimmer/ File photo

BRUSSELS – Euro zone countries swung into a trade deficit in June from a surplus 12 months earlier because of soaring prices of imported gas and oil, Eurostat data showed on Tuesday.

Eurostat said the trade gap of the 19 countries sharing the euro with the rest of the world, unadjusted for seasonal swings, was 24.6 billion euros in June, compared to a 17.2 billion surplus in June 2021.

Seasonally adjusted, the deficit was even bigger at 30.8 billion widening from 27.2 billion in May.

Eurostat did not give a breakdown for the euro zone, but for the whole European Union the trade deficit in energy for the first six months of the year almost tripled to 290.8 billion euros from 105.6 billion in the same period of 2021.

The EU’s trade gap with Russia, its main supplier of gas and oil, almost quadrupled to 90.6 billion euros in the first six months from 24.6 billion in the same period of last year.

The EU’s trade gap with Norway, which the bloc sees as a partial replacement for imports from Russia, surged even more spectacularly to 35.8 billion euros in the first six months from only 0.5 billion the year before.

Also the EU’s imports from China surged after COVID pandemic lockdowns have curbed them in 2021, while exports to China fell, producing a trade gap of 189.5 billion euros in the first six months compared to 98.0 billion a year earlier.