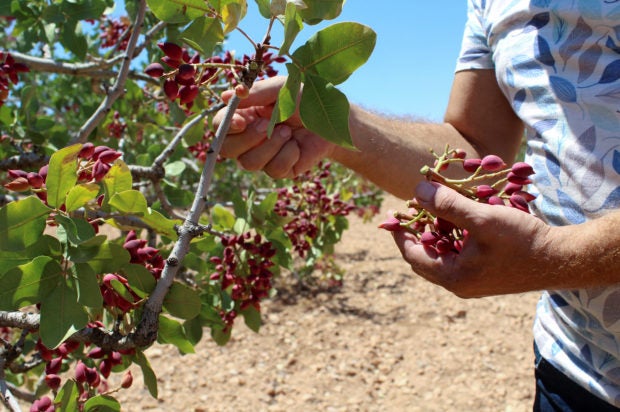 Farmer Nayef Ibrahim tends to a pistachio tree at his farm, in the northwestern village of Maan, Syria Aug. 8, 2022. REUTERS/Firas Makdesi

MAAN, Syria  – Returning to their orchards after years of war, Syrian pistachio farmers hoping to revive their valuable crop have had their hopes dashed by scorched trees and the ravages of climate change.

Laden with maroon-colored bunches of nuts that are harvested in summer, the pistachio tree is known in Syria as “a golden tree in a poor land”, reflecting the value of a fruit long exported across the Middle East and Europe.

But farmers near the northwestern village of Maan are harvesting just a quarter of the crop they gathered before the war, farmer Nayef Ibrahim said.

Ibrahim and his family left their farms when the area became a frontline in the conflict that erupted in 2011. They returned after government forces drove out rebels in 2019.

they have planted will take up to 12 years to bear fruit, Ibrahim said.

A successful harvest on his farm would likely take longer, with the road to recovery slowed by “the lack of rainfall, climate change as a whole, and the lack of basic materials that a farmer needs,” he told Reuters.

Syria saw its worst drought in more than 70 years in 2021, with harvests across the country hit hard, according to the International Rescue Committee aid group.

Ibrahim estimated his fields had received half the rainfall of previous years but that the rising costs of fuel to pump in water meant he couldn’t afford an alternative.

Nutrient-rich soil that could help him boost production was also unavailable or expensive, he said. 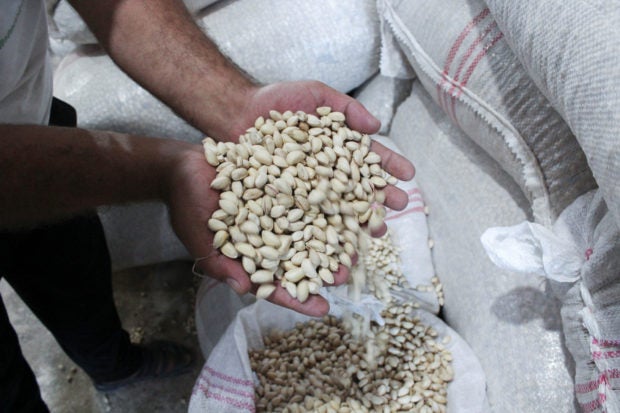 A worker displays pistachios at a factory in the town of Morek, Syria August 8, 2022. REUTERS/Firas Makdesi

Importing fuel, fertilizer and other basic needs for farming into Syria has been hampered by around a decade of Western sanctions, a collapsing local currency and now the conflict in Ukraine, which has prompted global price hikes.

The West has tightened its sanctions on the Syrian government since conflict broke out in 2011 over rights violations, but many Syrians say the measures have hit regular citizens the hardest.

“It’s hard for me to get pesticides because of the economic siege,” Ibrahim told Reuters.

Some farmers have tried to find workarounds, with solar panels installed at one pistachio orchard to power irrigation.

The nuts are harvested at dawn and sunset – the times of day when their shells split naturally, generating a cracking noise that guides farmers to trees ready for picking.

They are poured into machines that peel and sort them by size before being bagged in 50 kg sacks labelled “Aleppo pistachio” – a name recognized across much of the Middle East.

Clutching a bunch of freshly picked pistachios, farmer Youssef Ibrahim said he was disappointed at the size of the kernels. “If there was adequate irrigation, the nut should be bigger than this.”

Farmers across Syria have been struggling with similar problems, with indications of a poor wheat harvest adding to concerns about food supplies in a country where the U.N. says more people are in need than at any point since 2011.

Agriculture ministry official Jihad Mohamed said pistachio farming had suffered because the areas where they are grown had been badly affected by the war, noting widespread tree cutting.

Despite that, exports continued with Syrian pistachios selling in markets including Saudi Arabia, Egypt, Jordan and Lebanon, he said. 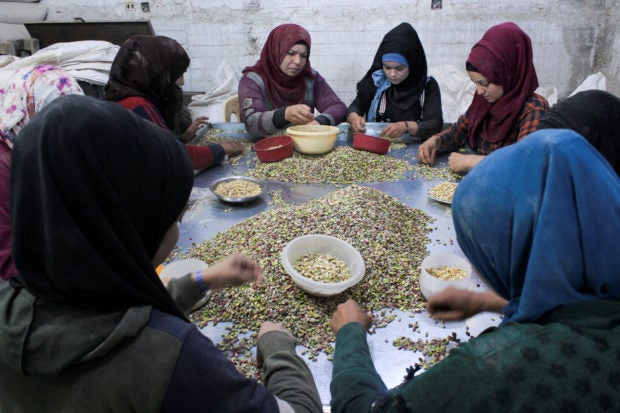 Women sort pistachios at a factory in the town of Morek, Syria Aug., 2022. REUTERS/Firas Makdesi