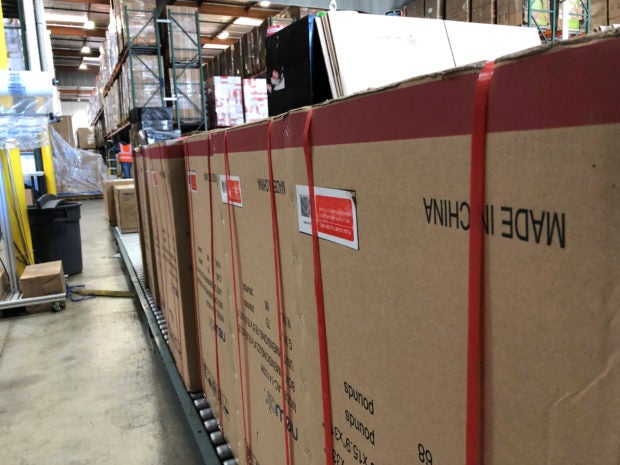 Boxes marked ‘Made in China’ are lined up in NewAir’s warehouse in Cypress, California, U.S. on May 24, 2019. REUTERS/Jane Ross/File photo

WASHINGTON- China’s war games around Taiwan have led Biden administration officials to recalibrate their thinking on whether to scrap some tariffs or potentially impose others on Beijing, setting those options aside for now, according to sources familiar with the deliberations.

President Joe Biden’s team has been wrestling for months with various ways to ease the costs of duties imposed on Chinese imports during predecessor Donald Trump’s tenure, as it tries to tamp down skyrocketing inflation.

It has considered a combination of eliminating some tariffs, launching a new “Section 301” investigation into potential areas for additional tariffs, and expanding a list of tariff exclusions to aid U.S. companies that can only get certain supplies from China.

Biden has not made a decision on the issue and all options remain on the table, the White House said.

The tariffs make Chinese imports more expensive for U.S. companies, which, in turn, make products cost more for consumers. Bringing down inflation is a major goal for Biden, a Democrat, ahead of the November midterm elections, which could shift control of one or both houses of Congress to Republicans.

But Beijing’s response to U.S. House Speaker Nancy Pelosi’s visit last week to Taiwan triggered a recalculation by administration officials, who are eager not to do anything that could be viewed by China as an escalation while also seeking to avoid being seen as retreating in the face of the communist country’s aggression.

China’s military for days took part in ballistic missile launches and simulated attacks on the self-ruled island of Taiwan that China claims as its own.

“I think Taiwan has changed everything,” said one source familiar with the latest developments in the process, details of which have not been previously reported.

“The president had not made a decision before events in the Taiwan Strait and has still not made a decision, period. Nothing has been shelved or put on hold, and all options remain on the table,” said White House spokesperson Saloni Sharma. “The only person who will make the decision is the president – and he will do so based on what is in our interests.”

Asked why a decision was taking so long, Commerce Secretary Gina Raimondo referred to the complicated geopolitical situation.

“After Speaker Pelosi’s visit to Taiwan, it’s particularly complicated. So the president is weighing his options. He is very cautious. He wants to make sure that we don’t do anything which would hurt American labor and American workers,” she said in an interview with Bloomberg TV.

With the most forceful measures regarding tariff relief and tariff escalation largely on the back burner for now, focus is on the so-called exclusions list.

The Trump administration had approved tariff exclusions for more than 2,200 import categories, including many critical industrial components and chemicals, but those expired as Biden took office in January 2021. U.S. Trade Representative Katherine Tai has reinstated only 352 of them. Industry groups and more than 140 U.S. lawmakers have urged her to vastly increase the numbers.

The Biden administration’s next steps could have a significant impact on hundreds of billions of dollars of trade between the world’s two largest economies.

U.S. industries from consumer electronics and retailers to automotive and aerospace have been clamoring for Biden to eliminate the duties of up to 25 percent as they struggle with rising costs and tight supplies.

The tariffs were imposed in 2018 and 2019 by Trump on thousands of Chinese imports valued then at $370 billion to pressure China over its suspected theft of U.S. intellectual property.

Some senior administration officials, including Treasury Secretary Janet Yellen, had argued the duties were imposed on “non-strategic” consumer goods that had unnecessarily raised costs for consumers and businesses, and removing them could help ease rampant inflation. Tai argued the tariffs were “significant leverage” that should be used to press China for changes to its behavior.

Multiple factors, in addition to China’s Taiwan response, have complicated the administration’s deliberations.

As U.S. officials considered getting rid of some of the tariffs, they sought reciprocal rollbacks from Beijing and were rebuffed, two sources said.

One of the sources, who said a unilateral removal of some U.S. tariffs on Chinese imports has been put on hold, said this was done in part because China failed to show any willingness to take reciprocal actions or meet its “Phase 1” trade deal commitments.

A spokesperson for the Chinese embassy in Washington said economic and trade relations between the two countries faced “severe” challenges.

“The (Pelosi) visit has undermined the political foundation of the China-US relations and will inevitably cause major disruption to the exchanges and cooperation between the two sides,” Liu Pengyu said in an email to Reuters.

The trade deal, reached at the end of 2019 with the Trump administration, required China to increase its purchases of U.S. farm and manufactured goods, energy and services by $200 billion in 2020 and 2021 over 2017 levels. China fell well short of these commitments, which included a $77.7 billion two-year increase in imports of U.S. manufactured goods, including aircraft, machinery, vehicles and pharmaceuticals.

The Peterson Institute for International Economics estimates  that China effectively bought none of the extra goods it promised. Beijing blamed the COVID-19 pandemic, which began just as the deal was signed in January 2020.

The U.S. Trade Representative’s office is now in the midst of a statutory four-year review of the tariffs imposed by Trump, which could take a few more months to complete. Final public comments on whether to keep them in place are due by Aug. 23.

Union groups led by the United Steelworkers have urged  USTR to keep the tariffs on Chinese goods in place to help “level the playing field” for workers in the United States and reduce U.S. reliance on Chinese suppliers.

Biden has been concerned about rolling back tariffs in part because of labor, which is a key constituency for him, and because of China’s failure to buy the products it had agreed to purchase, according to the first source. The White House has declined to lay out a timeline for when a final decision will be made.