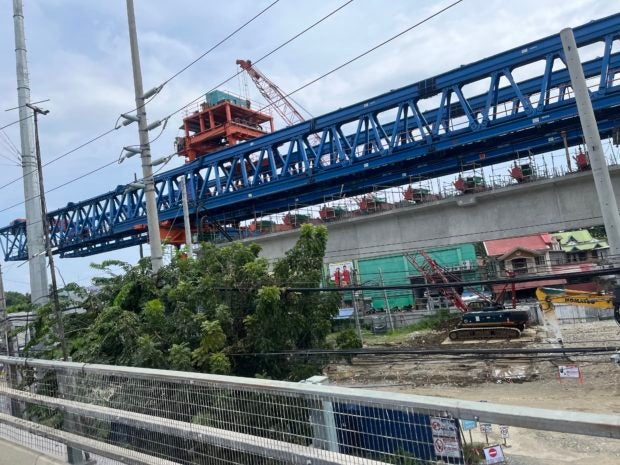 MANILA, Philippines — An economic think tank sees a reinvigoration of infrastructure development under the Marcos administration after the prolonged COVID-19 pandemic that delayed the rollout of some big-ticket projects.

Duterte had pledged to spearhead a “golden age” of infrastructure but the pandemic and the consequent lockdowns derailed some projects in the past two years.

“The Philippines certainly needs to upgrade its infrastructure, which is rated among the worst in Asia. Marcos is especially keen on expanding the country’s poor rail network, and has committed to increasing the current length of track in the country by nearly 50 percent,” Leather said.

Based on Capital Economics data, the Philippines had the lowest length of railways—less than 10 kilometer per one million people, among developed and developing Asian countries.

This year, the national government, local government units and state-run corporations have budgeted a total of P1.19 trillion for infrastructure, equivalent to 5.5 percent of gross domestic product (GDP).

The Marcos administration wants to “build better more” by keeping public infrastructure spending levels within 5-6 percent of GDP during the next six years. By the time President Marcos steps down in 2028, the government is expected to spend a record P2.38 trillion on infrastructure that year, potentially equivalent to a historic-high 6.3 percent of GDP.

In a report last Friday, the state planning agency National Economic and Development Authority (Neda) noted that the ambitious “Build, Build, Build” program jump-started by the Duterte administration was not yet complete, noting that several projects were still underway and others that remained in the pipeline.

“There may be revisions in project costs, which will require a reappraisal. Reprioritization may also be needed, with the expected tighter fiscal space,” Neda said. This was the reason why the Marcos administration was pushing for more public-private partnership (PPP) infrastructure projects to be bankrolled by business tycoons’ deep pockets.

“Despite these challenges, the government needs to sustain the ‘Build, Build, Build’ program to secure the economic and social benefits it promises to deliver—from the jobs generated during the construction phase, but more importantly, the better access to opportunities created once the infrastructure projects are completed,” Neda said.

But Leather flagged a potentially weaker peso to be wrought by the infrastructure buildup. “Under President Duterte, an increase in capital goods imports related to the infrastructure drive led to a sharp widening of the current account deficit, which weighed heavily on the currency. Despite a recovery over the past week, the peso is down by around 8 percent against the US dollar since the start of 2022, and we think further weakness is likely as capital imports are ramped up again.”

“A relatively low level of foreign currency debt means a weaker peso doesn’t pose a major threat to financial stability. However, a fall in the currency would still be unwelcome as it would put upward pressure on inflation, which reached 6.1 percent year-on-year in June,” Leather said.

“At its emergency meeting earlier this month, the Bangko Sentral ng Pilipinas (BSP) cited the weakness of the peso as one factor behind its decision to raise rates. The prospect of further peso falls is a reason to think that the BSP will raise rates further over the coming months,” Leather added.

National government wants to remain in charge of infra development

The need for a coherent infrastructure agenda