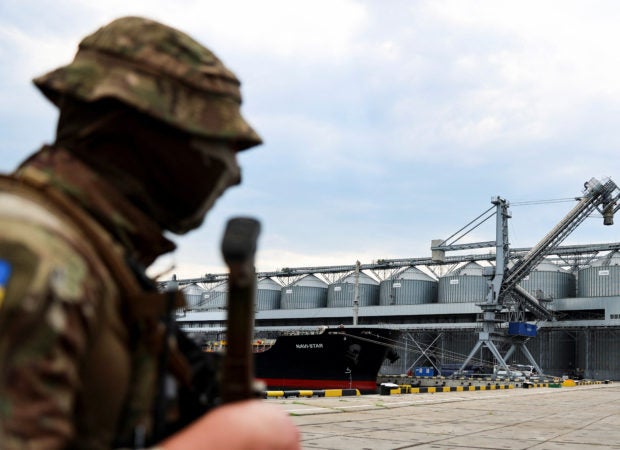 A Ukrainian serviceman stands in front of silos of grain at the Odesa Black Sea port, as the government of Ukraine awaits signal from  the UN and Turkey to start grain shipments.  July 29, 2022. REUTERS/Nacho Doce

ODESA, Ukraine – Ukraine is ready to start shipping grain from two Black Sea ports under a U.N.-brokered agreement but no date has been set for the first shipment, Ukrainian Infrastructure Minister Oleksandr Kubrakov said on Friday.

He told reporters in the southern port of Odesa that 17 vessels trapped by a five-month Russian blockade of Ukraine’s Black Sea ports were already loaded with grain, and another was now being loaded.

He hoped the first vessels would start leaving port by the end of this week.

Russia and Ukraine are major global wheat suppliers, and the agreement they signed in Istanbul last week is intended to ease an international food crisis worsened by Russia’s invasion of its neighbor on Feb. 24.

“After the signing of the grain initiative in Istanbul, the Ukrainian side has made all the necessary preparations for … the navigation of the Black Sea, to start exporting our grain products from our ports,” Kubrakov said.

President Volodymyr Zelenskiy’s office said the president had visited the Black Sea port of Chornomorsk on Friday. It quoted him as also saying Ukraine was ready to start shipping grain, and that Kyiv was awaiting a signal from its international partners to start the first shipment.

The agreement aims to allow safe passage for grain shipments in and out of the Odesa, Chornomorsk and Pivdennyi ports, blockaded by Russia since the start of its invasion. Moscow blames Ukraine for stalling shipments by mining the port waters.

Kubrakov, who signed the agreement for Ukraine, said Chornomorsk and Odesa were ready to start shipping grain and that he hoped Pivdennyi port would by the end of this week also be ready.

“In total, 17 ships were loaded before the war. Today we began the loading of another ship at Chornomorsk. We have, in principle, solved almost all technical questions,” Kubrakov said.

“We hope that today we will receive confirmation from the U.N. regarding the proposed corridor in which the ships will sail through the Black Sea towards the Bosphorus, and after this we (will be) ready to begin. I hope that the first ships will leave our ports before the end of this week.”

Kubrakov did not say what volumes of grain would be shipped and gave no further details of the planned cargoes.

“This initiative, if it works as we hope and expect it will, and if our Turkish and U.N. partners can ensure its execution, we are convinced that world (grain) prices will drop,” he said.

U.N. aid chief Martin Griffiths said on Thursday that “crucial” details for the safe passage of vessels were still being worked out but that he was hopeful the first shipment of grain could take place as early as Friday.

Bridget Brink, the U.S. ambassador to Ukraine, told reporters in Odesa that she hoped agreement would reached later on Friday to open the way for the first shipment.