Palacio de Memoria is now proudly in possession of a National Commission for Culture and the Arts (NCCA) marker. One that recognizes the Palacio as a heritage institution for its Adaptive Reuse. Held during simple, intimate ceremonies on July 19, 2022, at the Los Tamaraos Ballroom at the Palacio de Memoria, the marker is a conclusive testimony of the Lhuillier family’s dedication to making culture, history, and heritage, concepts that have living embodiments, and not just dusty words referring to an antiquated past.

Palacio de Memoria General Manager Camille Lhuillier-Albani welcomed the representatives from the NCCA and from Parañaque City, who graced the occasion. The event was marked more meaningful with the attendance of Ambassador Philippe Jones Lhuillier and Mrs. Edna Diago-Lhuillier, as it was Ambassador Lhuillier himself who had acquired the property decades ago in the early 2000s. 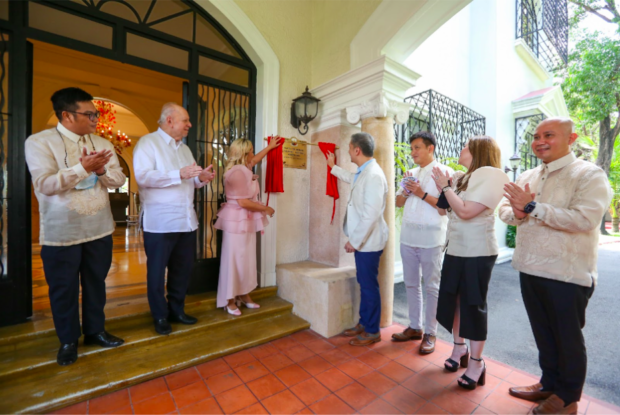 The awarding event was hosted by award-winning host and actress Issa Litton. The Nightingales, a splinter group of the famed Philippine Madrigal Singers took on singing the National Anthem, and regaled the guests with classic Filipino songs that helped bring meaning to the atmosphere of heritage and Philippine culture that served as a backdrop to the occasion.

True to its name, the Palacio de Memoria is really a ‘palace of memories’, as it’s one of the remaining pre-war mansions that date back to the 1930’s. It survived the Battle of Manila along Roxas Boulevard; and one of its most impressive decorative elements is the Filipino-themed terrazzo flooring in the main hall, attributed to National Artist Juan Nakpil. Depicting a local folk dance, it’s a testament to the wonderful job the Lhuillier family has done to rehabilitate the mansion and the surrounding grounds, and turn the whole complex into a living space where people can visit, tour, dine, and hold events.

The Philippine Heritage Awards (PHA), is a conservation recognition program given by the President of the Republic of the Philippines, upon the recommendation of the NCCA, wherein monetary prizes, awards and citations are given for special achievements, contributions, and services in the area of heritage preservation and conservation efforts. The Palacio received from the NCCA the 2020 Philippine Heritage Awards under the Adaptive Reuse category.

In his speech, Architect Michael Manalo spoke about how it’s up to a rare set of individuals from the private sector to act as stewards for cultural heritage. Too often, we see iconic buildings, houses and structures demolished or torn down in the name of progress, urban renewal, or modernization. By taking an award in the Adaptive Reuse category, the Palacio was demonstrating how cultural preservation can go hand in hand with economic function. 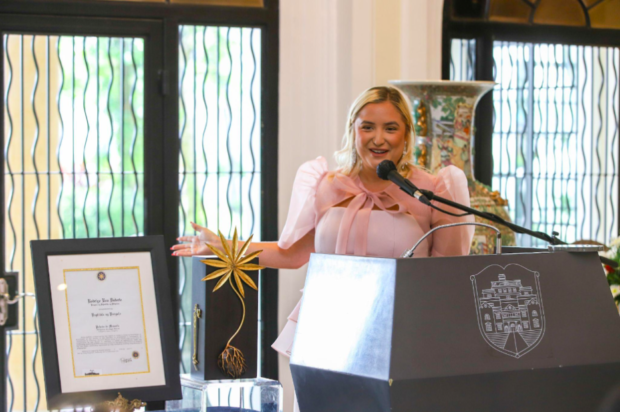 Mrs. Camille Lhuillier-Albani during her speech as she welcomes representatives and guests of the occasion.

Mrs. Camille Lhuillier-Albani was overjoyed to accept the marker and citation on behalf of the family. As the driving force behind the Palacio’s operations, Camille is specially poised to appreciate how this blend of preservation and function can be a viable business model. Daily visitors to the Palacio can tour the grounds, and can have a meal at The Loggia, which is run by Chef Margarita Fores. Have a drink at the Tanqueray Bar, or the Mosphil Lounge by Run Rabbit Run. The Palacio is a wonderful choice for events, wedding receptions, and big parties. The Casa de Memoria holds its auctions at the Palacio; and there are regular events such as the Palacio Flea Market, Tertulia de Memoria, an educational two-day event with cultural experiences and talks.

As can be gleaned from the above, a heritage award does not mean an institution has to be a stiff, formal, or restricted edifice; it can still be a vibrant, alive, space that welcomes visitors, and helps them create new, lasting, and precious memories. The Palacio de Memoria is more than ready to continuously live up to its name.

Be in the Now: No better time to live and invest in Angeles City, Pampanga