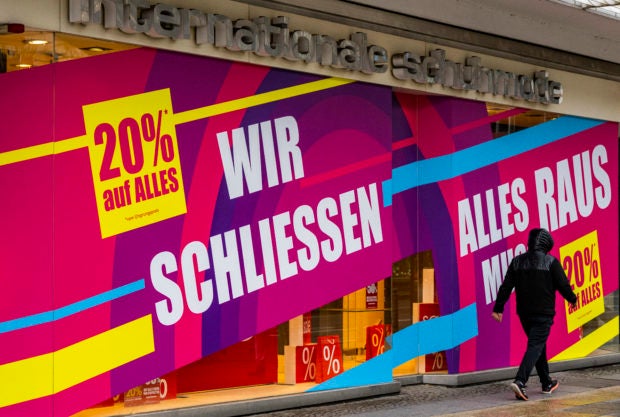 A sign in the window of a shop reads: “We are closing, 20 percent discount on everything”, as a man walks along the Tauentzienstrasse shopping mile in Berlin, Germany, on April 15, 2022. (Photo by John MACDOUGALL / AFP)

Frankfurt, Germany- The mood among German consumers has plunged to an all-time low, a key survey showed on Wednesday, as the fallout from the war in Ukraine has Europe’s biggest economy bracing for a painful recession.

Pollster GfK’s forward-looking barometer fell to minus 30.6 points for August, the lowest level since its records began in 1991, following a revised July reading of minus 27.7 points.

“In addition to concerns about interrupted supply chains, the Ukraine war and sharply rising energy and food prices, there are now fears about sufficient gas supplies for the economy and private households next winter,” said GfK consumer expert Rolf Buerkl in a statement.

The GfK survey of some 2,000 people found that Germans were significantly more pessimistic about the prospects for the economy than in the previous month, with the sub-index hitting a low not seen since the start of the pandemic shutdowns in April 2020.

“Fears of an impending recession are rising among consumers,” the statement said.

Russia’s war in Ukraine has pushed up energy costs, fueling already high inflation that stood at 7.6 percent in June in Germany.

Concerns are also growing that reduced Russian gas deliveries will have a catastrophic effect in Germany this winter, potentially shutting down factories and forcing the government to impose emergency energy-saving measures.

The GfK survey also found that respondents’ income expectations had dipped to a new record low, and that they were less inclined to buy big-ticket items than a month earlier.